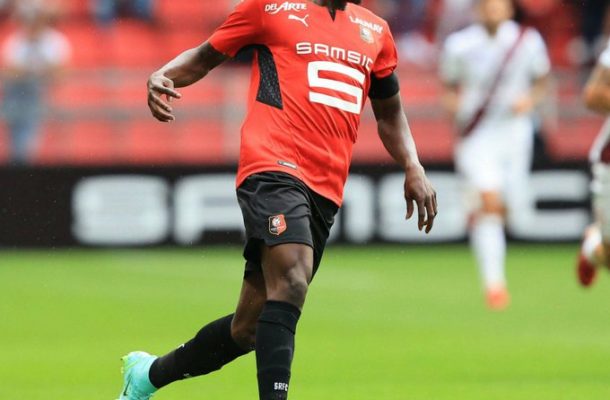 Ghanaian youngster has entered the history books in the French Ligue 1 with his brace on Wednesday against newly promoted Clermont Foot.

According to French journalist Pierre Lejolivet Kamaldeen Sulemana becomes the youngest player to score a double in Ligue 1 since Ousmane Dembélé.

The Ghanaian was on fire for his side as they whitewashed newly promoted side Clermont Foot on Wednesday evening.

The home side started the game on a bright note and their dominance counted when Jonas Martin opened the scores in the 32nd minute before Martin Terrier added the second goal in the 36th minute.

Rennes went into the break with a comfortable 2-0 lead as they made light work of the newly promoted side.

The Ghanaian forward score the first of his brace in the 55th minute before adding his second goal in two minutes later after the first to make it 4-0.

Gaetan Laborde scored the 5th goal for Stade Rennes in the 64th minute of the game before Flavien Tait scored the sixth goal in the 72nd minute.

The Ghanaian forward was replaced in the 78th minute with Matthis Abline while his compatriot Alidu Seidu was consigned to the bench.

Kamaldeen Sulemana has now scored three goals in 7 Ligue 1 matches for Rennes in his maiden season.