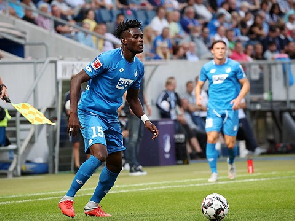 The Black Stars defender made an injury return on Sunday after featuring in Hoffenheim's 3-1 win over Nuremburg.

Manager Julian Naglesman confirmed, the team for the game against Lyon will not be different from the side that beat Nuremburg.

"Ishak Belfodil and Joshua Brenet are training again and I think that they will both be available. Apart from that, the lineup will look very similar to the game against Nuremberg," he said in a pre-match interview.

Adams returned to the squad after four weeks out and played 20 minutes of the game against Nuremburg.

The former Young Boys is expected to start against Lyon after impressing on Sunday.

Hoffenheim have a point after two games in group F of the UEFA champions League.