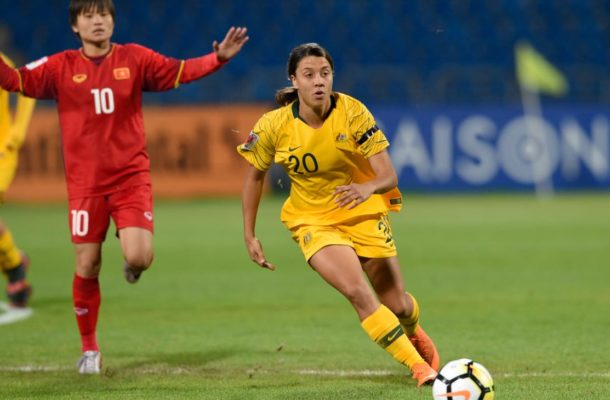 
In one of his first major decisions as boss, Milicic selected Kerr as captain and defender Steph Catley as vice-captain on the eve of the Cup of Nations tournament, which begins in Sydney on Thursday.

The shift to a permanent captain and vice-captain is in contrast to Australia's approach in recent years, where the role has been shared among a number senior players, with a different player wearing the armband in each of the side's five matches at last April's AFC Women's Asian Cup in Jordan.

Kerr's selection comes after a stunning two years for club and country, which have seen her become one of the world's brightest attacking stars, earning a litany of individual accolades, including AFC Women's Player of the Year in 2017.

The prolific forward revealed her pride at the appointment, telling the national team's official website, "It is a tremendous honour to have been recognised by Ante and the staff as captain of the Matildas."

“Ante gave a great speech about what it means to play for Australia to the team yesterday, and at the end of it surprised us with the announcement," she added.

"Together with Steph and the team we are committed to excelling at the 2019 FIFA Women’s World Cup, and there will be no bigger honour than to wear the armband in France."

Milicic revealed the decision to name Kerr and Catley as team leaders came after they made a strong impression during a training camp held in Brisbane last week.

“Sam and Steph have impressed me greatly,” he said, adding “We had four great training sessions and several team and individual meetings while we were in Brisbane, and to me their qualities as leaders of this group stood out.

“With any honour comes responsibility, however I trust that Sam and Steph as well as the other leaders in our squad are ready to grasp the opportunity to push this team to a new level,"

Kerr and Catley are both expected to line up for Australia against New Zealand in Sydney on Thursday, with further matches to follow against Korea Republic and Argentina on March 3 and March 6 respectively.