Key observation of the vetting of Kissi Agyabeng, the new SP 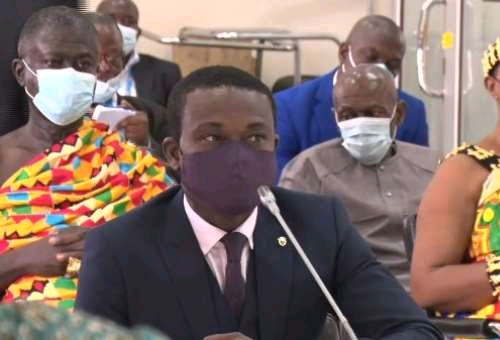 2. Mr.Agyebeng was in his usual element, very vocal and articulate in his answers, the way he carried himself was also quite impressive except to say I have to make the following quick observations.

3. The issue about making corruption a very expensive enterprise was very striking.
Is Mr.Agyabeng admitting that Corruption is very cheap under the current dispensation?
If it is, what has accounted for that phenomenon, and what is he going to do differently?
Did he take a swipe at the President unaware given the circumstances his predecessor resigned?

4. I particularly didn't like the response Mr.Agyabeng gave about the question on filling Martin Amidu's shoes.
Mr.Agyabeng atleast is very much aware of the circumstances leading to the resignation of his predecessor and the turf war that ensued and currently persists.
I would have wished Mr .Agyabeng didn't come across as taking sides in this turf war and rather have a more unifying approach to work and consult with both ends when necessary.
As we speak there are a lot of unfinished investigations and works by his predecessor Mr.Amidu which he is obliged to complete.
How is Mr.Agyabeng able to reach out to his predecessor for more information or explanation on official businesses after taking this dismissive swipe at him yesterday.
Personally I don't believe Mr.Amidu has any proper "shoes" to be filled by anybody. Mr.Amidu in that office was a huge disappointment and so he cannot be the yardstick of performance to any subsequent occupier of that office but I expected Mr.Agyabeng to adopt a more diplomatic approach to that question so he didn't come across as taking sides in the turf war that still brews between the government and his predecessor.

5. The question about his age was very unnecessary.
But it also exposes clearly the cultural hurdle Mr.Agyabeng has to overcome to stamp his authority in that office.
What he does in his first 100 days would be very emphatic to his success.

6. Mr.Agyabeng's swift and unambiguous dissociation of himself from the infamous Agyapa transaction even though he worked with/for a company that also worked on the transaction is clear indication to the promoters of Agyapa that the deal was fraught with serious irregularities and massive corruption.

7.One of my major highlights of the vetting yesterday was when Mr.Agyabeng bodly said that at any point if he is rendered unable to perform his functions as SP either by executive interference or any reason whatsoever, he would immediately resign.
That was one of the Achilles heel of his predecessor Mr.Amidu.
He stayed on too long to complain about executive interference.
If your appointors are not giving you the space to operate, you resign immediately and cite your reasons for resigning but you can't stay on, draw salaries, draw budgetary allocations and expend tax payers resources, then achieve absolutely nothing and come back to complain of interference.
I'm sorry we can't sympathise with you on that.
So must Agyabeng must take a cue from that if he doesn't want to be cited as the second occupant who failed in that office.

8. Mr.Agyabeng's claim that Ghana would be finished the day we scrap the office of Special Prosecutor was not quite a factual statement.
Atleast history in the last four years has taught us otherwise.
What we expect Mr.Agyabeng to emphasize on is how to create a strong working synergy between the various state agencies who are also fighting corruption so we don't see the kind of conflict we saw between the SP and other State agencies on who have jurisdiction on what issue.

9. We are seriously looking forward to Mr.Agyabeng's first 100 days in office and how effectively he would be able to restructure the office, equip it with both administrative and investigative capabilities and on top of it a strong prosecutorial team that would bring nothing but results.
His performance would be assessed based on that and nothing else!!