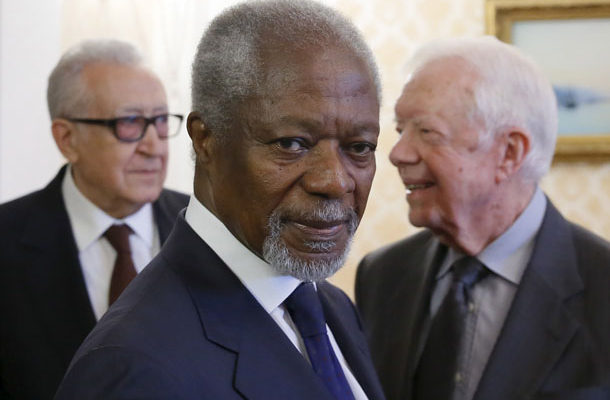 The office of Burma’s State Counselor Daw Aung San Suu Kyi announced the formation of the commission in national newspapers on Wednesday.

The announcement said the commission would recommend “lasting solutions to complex and delicate issues” in Arakan State.

Communal violence, mostly affecting the stateless Rohingya community, took place across Arakan State in 2012 and 2013, displacing up to 140,000 people, the vast majority of whom were Muslim. Buddhist and Muslim communities remain segregated across most parts of the state, with restrictions placed on displaced Muslims’ movements and access to public services.

Kofi Annan, born on the Gold Coast (now Ghana) in western Africa, had a career as a UN staffer before serving as secretary-general between 1997 and 2006. In 2007 he founded the Kofi Annan Foundation, which works on governance and human rights issues globally.

Mr. Annan has served as a peace envoy in various countries, including in Syria in 2012, and was appointed as chair of The Elders group of global statesmen in 2013.

A Memorandum of Understanding is to be signed between Burma’s State Counselor’s Office and the Kofi Annan Foundation, the Wednesday announcement said.

News of the commission’s formation, minus Mr. Annan’s participation, was delivered during meetings in the Arakan State capital of Sittwe on Aug. 15, conducted separately with Buddhist Arakanese and Muslim Rohingya community leaders by the Central Committee for Peace and Development in Arakan State—a body chaired by Daw Aung San Suu Kyi.

The Muslim members are Al Haj U Aye Lwin, founder of interfaith group Religions for Peace, and U Khin Maung Lay, a member of the National Human Rights Commission.

Besides Mr. Annan, the international members are Ghassan Salamé, a Lebanese academic and advisor to Mr. Annan as secretary general from 2003–2006, and Laetitia van den Assum, a career Dutch diplomat and advisor to UNAIDS from 2005-2006.

“We’ll work as a channel, conveying the voices of the affected communities on the ground. Without their involvement, we can’t work,” Muslim commission-member U Aye Lwin told The Irrawaddy.

“Our commission won’t conceal the truth,” he said.

He believed that Mr. Annan’s support would be constructive, due to his extensive experience in international affairs—including working as a conflict mediator—and his high global esteem.

After conducting consultations and assessing the situation in terms of the basic rights and security of the people of Arakan State, and local humanitarian and development needs, the commission will provide recommendations—including on conflict prevention and reconciliation—to the state counselor and release a report within 12 months of its establishment.

Tha Pwint, a retired Arakanese lawyer from Sittwe, said he was concerned that the government may not follow up on the recommendations of the report, since they would not be obliged to act, citing precedent in reports delivered to the previous government.

“However, since Kofi Annan will chair this commission, I think its recommendations will prompt a bigger reaction from the international community,” he said.

Yet, he expressed concerns about placing the resolution of Arakan State’s problems into “international hands.” He believed that “the international members [of the committee] could not know much about our internal affairs; it wouldn’t do good for them to take one side.”