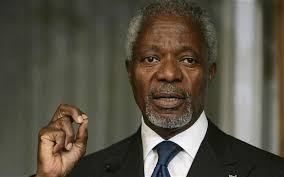 The Chairmanship of Kofi Annan for  the newly formed  Arakan Advisory Commission is in limbo,ghanaguardian.com has gathered.

The commission, which was formed to bring lasting solutions to Arakan State has been rejected by the Arakan National Party (ANP). The ANP has raised concerns over the involvement of Non-Burmese in its "internal Affairs".

The Office of Burma's State Counselor on Wednesday announced the formation of a nine-member team  including three internationals,  which is to be chaired by former United Nations Secretary General Kofi Annan, with a Memorandum Of Understanding expected to be signed between the office and the Kofi Annan foundation.

However,  In a letter to the Burmese Government, the ANP  expressed it objection to the inclusion of  three non-Burmese members selected to serve on the commission, stating that they would not be able to understand the background and the current situation on the ground in the Arakan State.

"The formation of the new commission would likely harm the rights of indigenous people—a reference to the Buddhist Arakanese—and national sovereignty". the letter read.

"The problems of the state is a matter of internal affairs which previous governments have failed to resolve in line with current laws."

However, a member of the commission, Al Haj U Aye Lwin said he finds the involvement of international committee members acceptable and does not believe that the new commission will interfere with Burma’s sovereignty, as the ANP alleged. The work of the committee, he explained, is to make recommendations to the government based on their findings, rather than to take action themselves.

He believed that Mr. Annan's support would be constructive, due to his extensive experience in international affairs-including working as a conflict mediator-and his high global esteem.

After conducting consultations and assessing the situation in terms of the basic rights and security of the people of Arakan State, and local humanitarian and development needs, the commission will provide recommendations-including on conflict prevention and reconciliation-to the state counselor and release a report within 12 months of its establishment.

Tha Pwint, a retired Arakanese lawyer from Sittwe, said he was concerned that the government may not follow up on the recommendations of the report, since they would not be obliged to act, citing precedent in reports delivered to the previous government.

However, since Kofi Annan will chair this commission, I think its recommendations will prompt a bigger reaction from the international community, he said.

According to a government announcement, within  next month, there will be a signing ceremony between the Kofi Annan Foundation and the Burmese government, initiating the commission’s work.