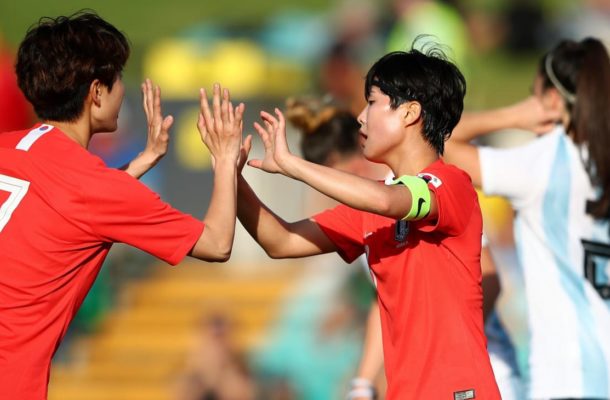 Sydney: Korea Republic laid down a Cup of Nations warning, beating FIFA Women's World Cup-bound Argentina 5-0 in the tournament over at Leichhardt Oval on Thursday.


Four goals in 22 second-half minutes, including a brace from the outstanding Ji So-yun helped the Asian Games bronze medalists register a superb opening day victory in the Sydney sun.

It took just four minutes for Yoon Duk-yeo's side to take the lead, with the impressive Moon Mi-ra lashing home off the opener off the underside of the crossbar to give veteran goalkeeper Vanina Correa little chance at her near post.

The East Asians continued to impress, but it was in the second half they reached a new gear, and 21-year-old substitute Son Hwa-yeon got the party started when she rounded Correa to easily slot home her side's second in 53rd minute.

With Korean confidence soaring, and Argentina's defence offering less and less resistance, Lee So-dam eased home a third goal just three minutes later to al but end the contest, before Ji added to her extensive individual highlight reel with two goals of her own.

The first, and Ji's 50th at international LEVEL, was a lovely outside of the boot finish which followed some super dribbling in the 68th minute, before the Chelsea star rounded out the scoring when she hammered home a loose ball after Correa barely kept out a looping effort from Jang Chang with 15 minutes remaining

Korea Republic's next test comes against hosts Australia on Sunday, while Argentina will look to bounce back against New Zealand.