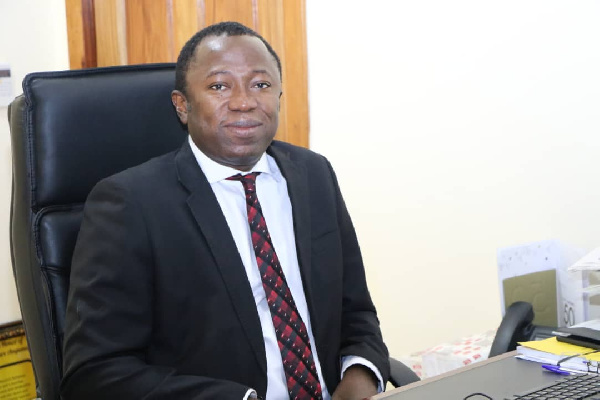 The new Chief Executive Officer of the Korle Bu Teaching Hospital, Dr Opoku Ware Ampomah, has assumed office after his appointment, the hospital has announced in a statement on Monday October 12.

Before his appointment, Dr Opoku Ware Ampomah was the Director of National Reconstructive Plastics Surgery and Burns Centre, the statement signed by Mustapha Salifu, head of Public Relations at Korle Bu said.

He is a Consultant Plastic Surgeon with many years of experience in Hospital Management.

The Board and Management of the Hospital wish to call on all staff and other stakeholders of the Hospital to accord the New CEO every support he needs to make Korle Bu the hub of quality healthcare in Ghana and beyond.

Dr. Opoku Ware Ampomah is a seasoned Consultant Plastic Surgeon and has over the past 23 years contributed in diverse ways to the Health Sector both as a Clinician and a Manager. He currently serves in various capacities; locally as the Director of the National Reconstructive Plastic Surgery and Burns Centre, (NRPSBC), Korle Bu Teaching Hospital, Accra, the Honorary Medical Director and Board Member for the Ghana Foundation of Operation Smile, the President of the Ghana Burn Association and internationally, as a Director of Resurge Africa (a UK-based charity supporting the development of Reconstructive Plastic surgery services in Africa), a team member of INTERBURNS (International Network for Training, Education and Research in Burns), an Executive committee member of the Pan-African Burn Society (PABS) and a member of the WHO Expert Committee on Emergency Medical Response for mass burn casualty incidents.

Dr Ampomah is a graduate of the International Leadership Program for Physicians at the Harvard University T.H. Chan School of Public Health. He is the first West African based practitioner to obtain the Intercollegiate Fellowship of the Royal Colleges of Surgeon, UK in the specialty of Plastic Surgery –FRCS (Plast) in March 2008, a Member

In terms of his philosophy for effective Health Care Delivery in an under resourced country, he believes that: “You should not let what you cannot do interfere with what you can do.”

He believes that it is possible to offer first class medical services in a third world setting; that every member of the Health Care Team is important; and that a “chain is as strong as the weakest link.”

This philosophy and believe have combined to trigger an unyielding passion for supporting the underprivileged. Dr. Ampomah is of the view that a doctor in the city should not limit his work to the hospital where he /she is based, but should reach out to patients in deprived communities; hence his second philosophy that: “If they can’t come to you, you should go to them.”

These philosophies underpinned his initiation of the Reconstructive Surgery Outreach programmes to underserved regions of Ghana. The programme has been running since 2012 and has provided free surgery to over 1700 patients so far in areas such as Dormaa Ahenkro, Tamale, Techiman, Jirapa, Nadowli, Bole, Ho etc. (with the involvement of various sponsors such as Christ for the Rural World, GNPC and the Ministry of Health). This volunteer effort has also been practically demonstrated by him through his leadership of outreaches in collaboration with Operation Smile to various local communities such as Ho, Koforidua, Tamale, Cape Coast and International ones such as Antananarivo, Madagascar, Mekelle, Ethiopia, Lubumbashi – Democratic Republic of Congo, Zhenxiong, China.

Dr. Ampomah is a firm believer that health personnel should be well trained and always be abreast with current global best practice. In line with this belief, he has undergone extensive training in the UK, USA, Taiwan and Chile. He has used his international network to provide opportunities for the Doctors and Nurses and other Health Care workers in the department to train abroad in countries such as the UK, USA, India, Bangladesh and South Africa. He has also introduced new courses locally to enhance local skills transfer.

In collaboration with Resurge Africa and the Canniesburn Plastic Surgery Unit, Glasgow, he obtained an 80,000 pound sterling grant from Tropical Health and Education Trust (THET) and UK Aid to build capacity in Burn Care Services in Ghana. Together, they started the novel Postgraduate Diploma Course in Burn and Plastic Surgery Nursing. Eighty (80) nurses from across the nation have graduated successfully so far. Cost savings to the country was in excess of 2.5 million pound sterling.

He initiated the Emergency Management of Severe Burns Course which has been running regularly since July 2008. He instituted the Cadaveric Flap Course for Advanced Surgical Training in Ghana from 2011 as well as the Microsurgery training course, thereby providing localized skills transfer/ capacity building to surgical trainees with significant cost savings to the nation. He organized Ghana’s first Tissue Viability Training programme/workshop in August 2016. Under his leadership, the NRPSBC has become an internationally recognized training hub for the Sub-region. He is a regular invited speaker at many international conferences and Webinars, and a Public Education volunteer on various media platforms.

As Country Medical Director of Operation Smile from 2014, he has led effort to build local capacity to the extent that from 2018, the Ghana Foundation has transitioned from having majority foreign expertise on Surgical Outreach missions to consisting exclusively of Ghanaian multidisciplinary medical expertise. Additionally, international missions now consist of more than 70% locally based healthcare personnel. Furthermore, Ghanaian volunteers are now a reliable source of expertise for Operation Smile missions around the world.

Dr. Ampomah is a highly driven and hands-on leader. He has brought to bear some innovative ideas and practical solutions to problems in the delivery of the plastic surgery service. In response to the needs of the Centre and patients, he established an in- house factory to produce sterile dressings in 2017.This has resulted in significant cost savings to both patients and the Centre and generated extra income for Staff Welfare Activities and to support needy patients.

He set up the first state-of-the-art Microsurgery Skills Training Laboratory in Sub Saharan Africa at the NRPSBC in February, 2020 with funds from the British High Commissioner, H.E. Iain Walker and the Ghana Grand Fundraising/Awareness Tour, a 1000km Cycling Tour in August 2019, to raise Funds for the Burns Centre and create awareness about burns and other health and social issues (He personally rode the last 100km from Akosombo to Accra). Thirty–Five Thousand pounds was raised (£35,000).

Under his leadership, the NRPSBC has seen a lot of infrastructural changes. Through his astute fundraising skills, he obtained a 1.6-million-dollar grant from Ghana National Petroleum Corporation (GNPC) which was used to complete Ghana’s first Burn Intensive Care Complex, which comprises of a six-bed bed ICU, six-bed High Dependency, Executive Wards, Theatres, Conference room, Meeting rooms, Library, offices, Laboratory, Out-Patients Department, Laundry, Sterilization Unit etc. This was commissioned in December 2018. A one million-cedi grant was also obtained from the National Petroleum Authority (NPA) and used for major refurbishment and upgrade of existing facilities at the Centre.

He believes in community and service and making an impact by social action. As a Board Member of the CHEERS Children’s Club, a non-governmental Children’s Welfare Organization, he has been instrumental in the establishment and running of two Community Children’s Libraries in Madina and Korle Bu since 2003.