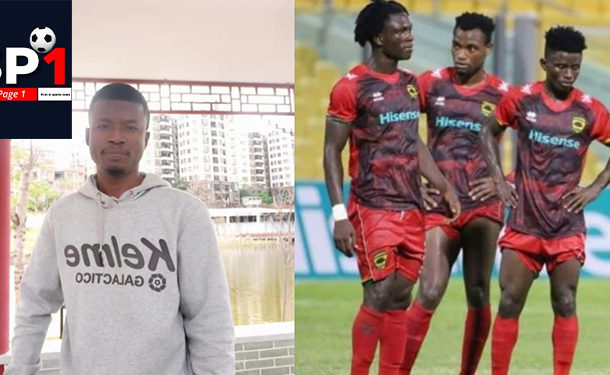 A goal each scored by Asante  Kotoko against Es Setif will attract a 1000 Ghc prize money, a staunch Porcupine  fan has promised.

Emmanuel Kwaw, who lives in China, is ready to pay for as many as the Reds will score against the Algerian Giants in the first leg their CAF Confederations Cup Play Off.

It is a "score more and take more" pledge by a diasporan Circles Member of the club, Emmanuel Kwaw, who is an active member of Circle 0086 in China. According to him, what makes the fans of Asante Kotoko happy is to see the players scoring goals for the club in matches, and that is exactly what he will reward the players for.

He explained that the amount will be a reward for the player who scores the goal and not a package for the entire team. In essence, should Asante Kotoko score two goals against E.S Setif, the players who will score the goals will be the sole beneficiaries of the fat bonus promise.

To recall, Mr Kwaw promised to pay GHC10,500.00 for the 21 players selected for Asante Kotoko’s Champions League preliminary stage first leg match against Mauritanian side FC Nouadhibou. At the time, he was prepared to pay the amount on a condition that Asante Kotoko are able to beat FC Nouadhibou by a margin of 3 goals unanswered. Unfortunately, the game ended in a 1-1 draw after the Nouadhibou, the home side, came from behind to equalize from the penalty spot. The Porcupine Warriors failed to meet the threshold and the promise was accordingly not delivered.

In the Confederation Cup Play Off clash with E.S Setif on Sunday however, Mr Kwaw is ready to pay the amount he’s promised whether or not Asante Kotoko wins the match.

“If you will recall when we were playing our other match (against FC Nouadhibou) I made a certain promise and this time I’ve seen that the goals are coming more, so once the goals are coming, for me as a Kotoko supporter here in China I’m very interested in that”, Emmanuel said in interview with ghanasportspage.com

He went on to make his fresh promise and emphatically stated that this time, only goals are what he’ll be paying for and not the over all outcome of the game. “I’ll plead with them (the players) that if the goals will flow like this, then each player who will score a goal (against E.S Setif) I will give him GHC1000.00. It doesn’t matter the number of goals they’ll score, if one player scores 1 goal it is GHC1000.00, if Kotoko is able to score 10 goals that is GHC10,000.00 and I will pay to each player who scores. Even if one player scores 5 goals I will give him GHC5,000.00, so it is a promise I’m making to the players that they should continue to score”, he emphatically pledged.