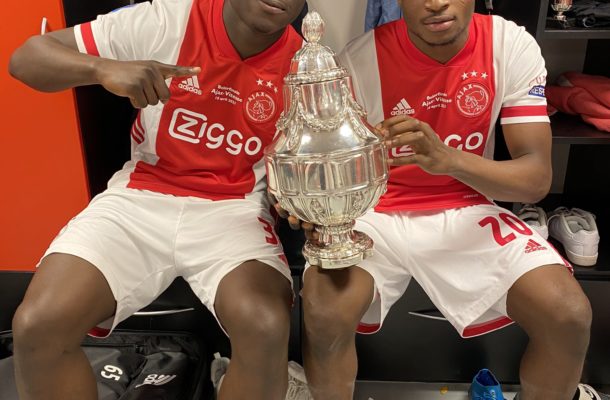 Ghanaian duo of Brian Brobbey and Kudus Mohammed have won their first ever titles with the Dutch giants by beating Vitesse Arnhem in Dutch Cup finals.

Ajax has won the KNVB Cup for the 20th time, with a 2-1 win over Vitesse of Arnhem. Substitute David Neres scored the winning goal for the Amsterdammers in the first minute of extra time.

The game started openly with Armando Broja going close for Vitesse before Ryan Gravenberch put an effort straight at Remko Pasveer.In the 23rd minute, Gravenberch did open the scoring with a powerful finish from close range. The midfielder became the youngest player to net in a KNVB Cup final since 1981.

Davy Klaassen almost made it 2-0 shortly afterwards before Vitesse equalised in the 30th minute. Broja crossed for Lois Openda to net from close range.

Ajax looked to dominate after the opener but chances for Davy Klaasse, Antony and Gravenberch did not lead to a goal. For Vitesse, Openda had to limp off with a hamstring injury, while they also lost Ali Dasa.

In the 86th minute, Vitesse were reduced to ten men when Jacob Rasmussen saw red for a late challenge on Antony. It appeared the game was heading to extra-time, but in the 90th minute, a cross found substitute David Neres alone at the back post and he netted the winning goal.

Ajax are the KNVB Cup winners for the 20th time and are on course to seal the double with the league title to follow soon. Vitesse now have to concentrate on the league.

Kudus has played 16 times in all competitions for the club since joining from FC Nordsjaelland in the summer.

Brobbey who is on his way to RB Leipzig has recorded 1 assist and 6 goals from 16 matches for the side.