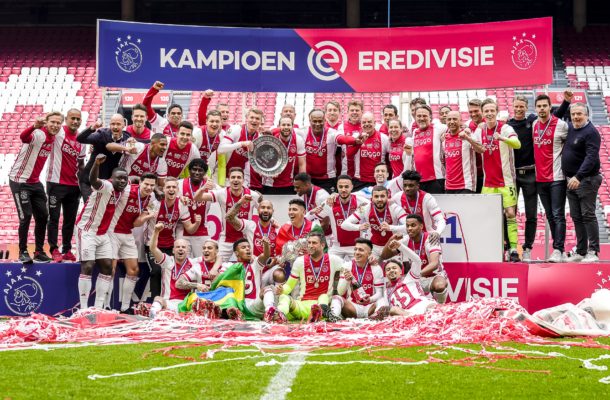 Mohammed Kudus was a 77th minute substitute for Ryan Gravenberch while Brian Brobbey was an unused substitute.

Ajax Amsterdam clinched their 35th Dutch league title on Sunday with a 4-0 victory over Emmen.

Jurrien Timber, Sebastien Haller, Davy Klaassen and Devyne Rensch scored for Ajax in a game played in front of empty stands due to anti-Covid measures.

Despite calls from the authorities to avoid gatherings, thousands of fans gathered around the stadium, according to Dutch news agency ANP.

Erik Ten Hag's side hold a 15-point advantage over second-place PSV Eindhoven, who have four matches to play including their game later on Sunday against Heerenveen.

No champion was crowned last season, which was halted in early March by the COVID-19 pandemic, with Ajax leading the table.

Ajax announced on Friday they had extended the contract of coach Erik Ten Hag until 2023, ending rumours he was headed to Borussia Dortmund in the Bundesliga or Tottenham in the Premier League.

"I am happy in Amsterdam and the management have assured me that the current squad will be retained and even strengthened in certain positions," said the coach who has been at the Johan Cruyjff ArenA since 2017.