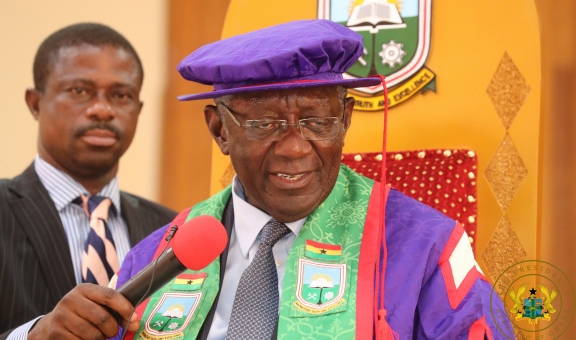 President Akufo-Addo while speaking at the Investiture of ex President John Agyekum Kuffuor as the Chancellor has said the move is a well deserved one.

The President further indicated that the move was the right choice, considering the fact that ex President Kuffuor when in office took the mantle of assenting the Western University College of Kwame Nkrumah University of Science and Technology to become UMAT on November 12 2004.

He further said  “it is a well-deserved honour, given in recognition of the immense work you did, during your time as President of the Republic, not only for UMaT, but also for Mother Ghana. Ayekoo. I commend the authorities of the University for this admirable gesture.”

The event, organised at the University's auditorium received applause for its role of raising industry-oriented graduates in engineering, with research findings, has put the country, in a strategic position to be a global leader in mining and its allied industries.

As stated by the President, Ghana is a rich country in terms of minerals and with a 1,000 year history of mineral exploitation,

President Akufo-Addo also hailed the University for its effort of contributing to the fight against galamsey by training 400 small scale miners, with an 1,000 more set to be trained this year, and the manufacture of “Sika Bukyia”, a direct smelting kit for the recovery of gold without the use of mercury.

He further indicated that the government, through  the Ministry of Lands and Natural Resources, have the plan  to provide the manufacture and sale of ‘Sika Bukyia’ to all licensed small scale miners.

The government is determined to exploit the country's bauxite and iron ore deposits having the Ghana Integrated Bauxite and Aluminum Development Authority as the driving force. The President expressed his delight about the progress made in a novel technology promoted by the University which involves the use of plastic waste to upgrade bauxite ore to yield 90% alumina, as against the present grade of 40% to 45%.

“As a result of this technology, the value of the ore will increase some tenfold. The research work being undertaken here is invaluable, and will assist greatly in our nation’s quest to transform our economy from a raw material producing and exporting one to a value-added, industrialised economy,” he added.

President Akufo-Addo on that note lauded the Vice Chancellor, the staff and team of administrators, for sticking to UMaT’s core mandate of engineering education, to complement efforts to advance the National Policy of achieving 60:40 student ratio for the Sciences as compared to the Humanities, through the promotion of Science, Technology, Engineering and Mathematics (STEM) education.

He further said“I wish to assure you that the Akufo-Addo Government will insist that the process of equipping UMaT with the requisite logistics, involving the rehabilitation and equipping of existing laboratories, and the construction of new buildings, that is currently ongoing, will be systematically pursued, to enable it deliver effectively on its mandate of teaching, research and service to the community”.

“I have been informed about the number of legacy projects on campus. The energetic Minister for Lands and Natural Resources, John Peter Amewu, has assured me that, through the Minerals Development Fund, these legacy projects will be completed soon in commemoration of today’s event.”

With the Wassa Fiase Traditional Area donating 26 square kilometres of land to the University, for the construction of a 20,000 student capacity campus, President Akufo-Addo proclaimed that “Government will give an annual special budgetary allocation of five million cedis (GH¢5 million) to the University for the realisation of the project.”