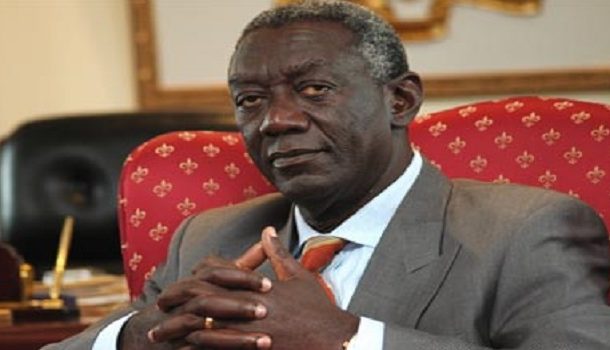 He said, some of Kufuor’s cellmates told him about the hatred Kufuor had for his late father but it was surprising that he [Kufuor] was nice to him when they first met at a political rally in the 1990s at the Hearts Park which is behind the Arts Centre.

He believes that Professor Adu Boahene is the most honest leader NPP has ever had.

On his Facebook timeline, Dr Nkrumah wrote, “Will it surprise Ghanaians to know that during his days in cells (political detention after the Acheampong coup that overthrew Busia in 1972), this very Kufuor was running Kwame Nkrumah down? I was told several stories from one of his cellmates about his hatred of Nkrumah!

“The first time I met Kufuor was at the Hearts Park behind the Arts Centre, it was at a political rally organized by the opposition somewhere in the 1990s. On the surface, he appears like a nice guy, but is a snake under [the] grass! For me personally, Professor Adu Boahene (who lost the 1992 elections to NDC) although an opponent of Nkrumah’s ideology was a more honest leader of NPP.”

Sekou Nkrumah’s public criticism of the former President comes after he [Kufuor] made some comments in his recent interview with Accra-based Angel FM.

J. A. Kufuor during the interview accused the first President of Ghana, Osagyefo Dr Kwame Nkrumah, of rushing to develop Ghana immediately after the country came out of independence.

He said the current hardship facing the country is a result of the rush because Ghana as a young baby didn’t learn how to crawl, walk and run but rather started running when her freedom was granted by the British.

“After our independence in 1957, as a developing country [with all the] leadership challenges, we did not take our time; we could not learn how to crawl before walking and running but we immediately jumped into running,” President Kufuor explained in an interview monitored by GhanaWeb.

“…our economy is not working properly, social mobility, unemployment and all the other challenges are because we rushed. It was good for us as a new nation to have the vision to rise but we did not plan it very well, we just rushed and its result is the hardships we are feeling today,” President Kufuor stated further.

He continued: “immediately after our independence, we said we wanted to industrialize, so we should build factories. In the first Republic, factories were springing up and we needed money to do so, so we used our reserves at the Bank of Ghana…our reserves were close to 400 million dollars because we were only six million people…

“Four years after our independence; before our population reached about ten million, all our reserves have been spent because instantly, we wanted to construct factories; shoe factory, leather factory among others.

“We did not understand that because of the reserves, we needed to plan. Even though we needed the factories, we needed to strategize and find a way to add to our reserves but we did not, which has affected our economy today…”

But Sekou Nkrumah says, after reflecting on the former President’s comments, he is convinced that his comments were a much more serious matter than he thought of.

“After taking time to reflect on what ex-President Kufuor recently said about Nkrumah, I am of the conviction that it is a much more serious matter than we think!” he posts read.

Sekou Nkrumah explained, “In fact, what Kufuor is saying is that we didn’t really need independence and that we are better off under the manipulations of the West!

“It is important to note that if as Ghanaians we cannot appreciate what Nkrumah did for this country, then going forward we will continue to play into the hands of Western interests, and continue to wallop in ignorance and poverty!

“We have to understand our history very well, yes Nkrumah had his faults and shortcomings, but his vision for Ghana and Africa goes way beyond petty partisan politics. The man Kwame Nkrumah put Ghana, Africa, and the black man on the world stage, we should be proud of that achievement. It not only defines us but also guides our path to self-reliance, confidence, and prosperity!”