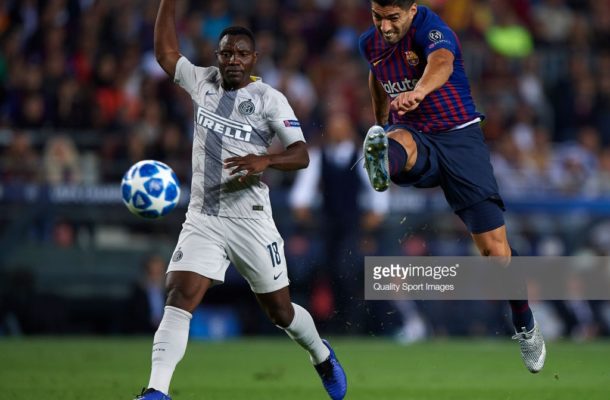 BARCELONA, SPAIN - OCTOBER 24: Luis Suarez (R) of Barcelona competes for the ball with Kwadwo Asamoah of Internazionale during the Group B match of the UEFA Champions League between FC Barcelona and FC Internazionale at Camp Nou on October 24, 2018 in Barcelona, Spain. (Photo by Quality Sport Images/Getty Images)

Kwadwo Asamoah played full throttle as Barcelona cruised to a 2-0 win over Inter Milan at the Nou Camp.

Barca, who were without Lionel Messi after he fractured his arm on Saturday, took the lead on 32 minutes as Rafinha volleyed home from Suarez's sublime cross.

Alba then applied gloss to the result as he fired past Handanovic from Ivan Rakitic's pass with seven minutes left.

Victory sent the five-time Champions League winners clear at the top of Group B with three wins from three, with Inter second on six points, while Tottenham and PSV Eindhoven have a point apiece following their 1-1 draw earlier on Wednesday.