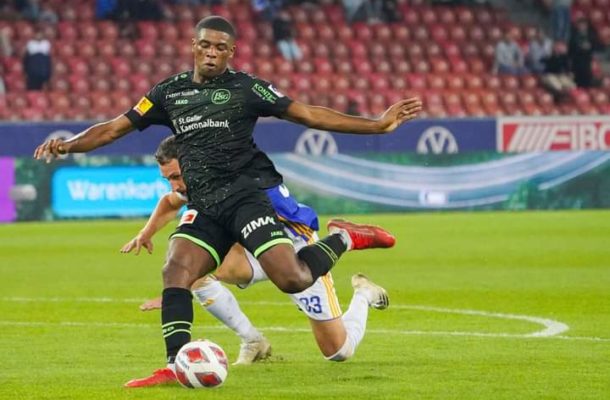 Swiss born Ghanaian forward Kwadwo Duah scored for his side St Gallen in a seven goal thriller but his goal was not enough as his side were whitewashed 5-2 against Grasshoppers on Saturday.

The home side raced to a two goal lead with Mamadou Kaly Sene and Leo Bonatini the goal scorers for Grasshopper before the break.

Nicholas Luchinger pulled one back for the visitors just a minute into the second half but it was only a consolation.

Sene scored again to restore the two-goal advantage for Grasshoppers before three minutes later Duah converted a penalty to reduce the deficit.

However, goals from Bendeguez Bolla and Djibril Diani in the 70th and 84th minutes sealed the victory for Grasshopper.

Duah has scored two goals after 8 appearances in the Swiss top-flight this season.

Meanwhile, Black Stars goalkeeper Lawrence Ati-Zigi was in the posts for St. Gallen.