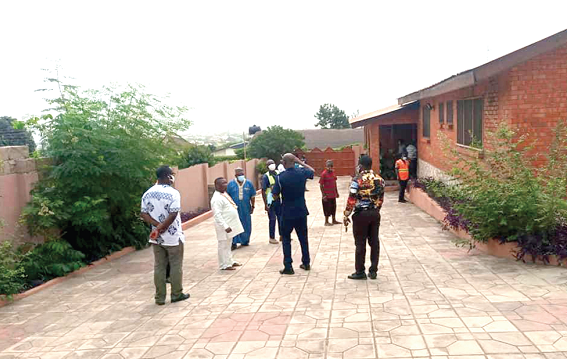 A house allegedly used as a centre to promote Lesbian, Gay, Bisexual, Transgender, Queer and Intersex (LGBTQI) activities in the country has been locked up by its owner.

The four-bedroom house is located in a serene environment around the Jasmine Street at Ashongman Estate in the Greater Accra Region.

The house, which is decorated with flowers, has no signage.

It contains a front desk, a conference room and some office equipment, such as photocopiers, cabinets, a projector and a flip chart.

About 10:30 a.m. yesterday, some policemen from the Kwabenya District Police Command, as well as some traditional leaders from the Kwabenya Traditional Area, arrived at the house to ascertain the veracity of rumours going round that it was being occupied by members of the LGBTQI.

They were later joined by some officials of National Security, the National Investigations Bureau and the Ga East Municipal Assembly.

When the Daily Graphic arrived at the place, the owner of the house, identified as Dr Daniel Asenso-Gyambibi, a Director at the Building and Road Research Institute of the Council for Scientific and Industrial Research (CSIR), was seen conducting the police and the other officials around the house.

It was found that three out of the four rooms were being used as offices.

All the doors were left ajar and there were no people in the building.

According to Dr Asenso-Gyambibi, he rented out the house to one Alex Kofi Donkor in December 2020 for residential purposes.

Although the landlord and the security men refused to talk to journalists, information gathered indicated that Dr Asenso-Gyambibi, who resides in Kumasi, had informed the police that the house was being used as an advocacy centre for LGBTQI rights.

He expressed worry that the building could be destroyed following threats by some people.

Speaking to the Daily Graphic, the Public Relations Officer of the Kwabenya Traditional Council, Nii Mensah Dza Nyomo, expressed satisfaction with the decision of the landlord to lock up the house.

He said the council had initiated an investigation after it learnt that a building in its jurisdiction was being used to host LGBTQI members.

"Through our investigation, we found that it was true the building was being used as an office to promote acts frowned upon by our laws. We are happy the place has been locked up now," the PRO said.

He said the council would continue to monitor activities in and around the house.

Last Wednesday, the council threatened to go after those behind the presence of LGBTQI members in the area and burn down the house if it was established that meetings were being held there.