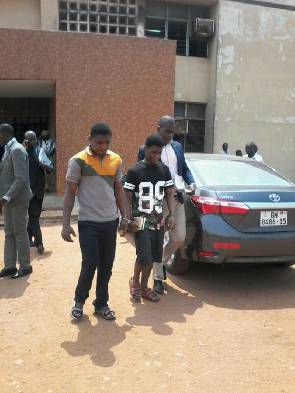 A lawyer defending two suspects in the murder of J. B Danquah, MP for Abuakwa, has asked a District court to compel the Police to provide him with medical report on one of his clients, Daniel Asiedu’s age.

Mr Augustine Obuor noted that when Asiedu was arrested he told the Police that he was 18 years old but the Police disagreed.

According to Mr Obuor,the Police are still keeping a report which indicated that that the accused is a minor and so there would be no need to appear in court.

However counsel said if the report indicated otherwise, it would give Asiedu the opportunity to prepare for his defence during the committal proceeding and the trial.

“If the accused person is 18 years he is still a young offender and needs to enjoy certain rights under the Juvenile Justice Act. The prosecution is bound to provide documents per the procedure of the trial,” he said.

Superintendent of Police Francis Baah said Asiedu did not tell the Police that he was 18 years during his arrest.

He said the Police had done wide range of investigations and their outcome indicates that Asiedu was not 18 years old.

According to the prosecution the Police had gone to Nigeria where he attended school, the hospital where Asiedu was born, looked through his weighing card and talked to his father and other relations.

He said prosecution did not have to serve the defence with a piece meal adding as at the time Asiedu was “writing his statement the age he gave us was 19”.

Mr Baah said the medical report confirmed that Asiedu was above 18 year old.

The court adjourned the matter to October 19 for continuation of submissions on Asiedu’s Medical report.

Asiedu and Vincent Bosso are being held for murder of the Late MP, which occurred on February 9, at his Shaishie residence.
 
Bosso has been charged with abetment of crime.

The facts as presented by Mr Baah are that on February 8, at about 2340 hours the deceased came home in his private vehicle driven by his driver Samuel Berko Sarkodie.

Prosecution said the driver having brought his master home handed over the keys to him and left for his residence at Kasoa while the deceased then retired to his bedroom upstairs.

He said at about 0100 hrs, Asiedu and Bosso, both armed, went to the house of the deceased and Asiedu after entering the house picked up a ladder and climbed to the porch of the top floor and entered the bedroom of the deceased through the window while the deceased was sleeping.

Prosecution said the deceased who was bleeding profusely fell by his bed helpless and Asiedu stabbed him several times on the right chest and neck.

Realizing that the deceased was almost dead, Asiedu left him and took away his three iphones.

Prosecution said Police investigations led to the arrest of accused persons who stated that their aim of going to the deceased house was to steal.