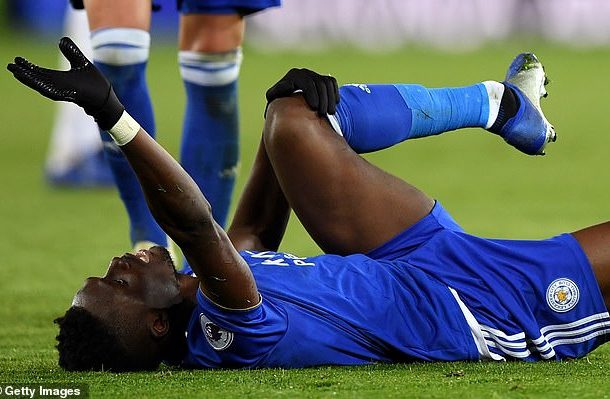 A horrific injury to Ghana’s Daniel Amartey cast a long shadow over Leicester City’s clash with West Ham at the King Power Stadium.

Amartey who was deployed at right-back, left the field in stoppage time with his leg in a brace following a clash with West Ham's Michail Antonio.

The faces on the pitch and in the dugout's left no doubt as to the seriousness of the injury, and the player, clearly in agony, was stretched off to applause from a sympathetic crowd.

The 23-year-old has been heavily involved for Claude Puel's side this season, featuring in nine of their ten Premier League games.

The match ended 1-1 as both teams settled for a point.

Fabian Balbuena broke the deadlock in the 30th minute with his first West Ham goal after heading against the post before tapping in the rebound.

The Hammers were however reduced to 10-men eight minutes later when Mark Noble received his marching orders for a high tackle.

Wilfred Ndidi got the equalizer for the foxes in the 89th minute with a huge slice of luck after his long-range effort took a big deflection which ended up in the back of net.