List of NPP bigwigs alleged to be galamsey kingpins 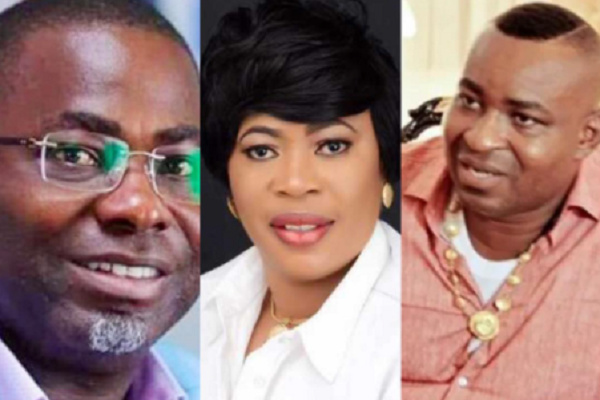 From the attempted gag of Otumfuo to Kweku Baako’s threat to Kennedy Agyapong’s admission that ruling party bigwigs are complicit in the menace of galamsey, it is increasingly obvious the fight against illegal small scale mining is not just against some Chinese and their Ghanaian collaborators in the trenches but also against political elements who walk in the corridors of power.

As intimated by Kweku Baako, it has become crystal clear that the fight against galamsey will continue to be a charade until President Nana Addo Dankwa Akufo-Addo and his sector ministers are keen on prosecuting his own party members found complicit in galamsey.

From 2018 when the battle commenced to early 2021 when the government renewed its commitment after watching it collapse in late 2019, a barrage of allegations, mostly unsubstantiated have been levelled against known NPP members who are said to be undoing the government’s effort in that regard.

The allegations have been thrown in from several quarters.

The opposition National Democratic Congress (NDC) has announced a few names, the Small Scale Miners Association in the past released a list and most interestingly leading NPP members including the maverick Kennedy Agyapong have made some claims against their own party folks.

Despite the widespread nature of these claims, little effort has been made by law enforcement agencies to investigate and prove the veracity or otherwise of the allegations.

As the campaign continues, here is a list of five NPP members who have either been ALLEGED to be galamsey kingpins or accused of aiding in the menace.

When audio emerged of her threatening and accusing the Minister of Roads and Highways, Amoako Atta of incompetence, a group affiliated to the NPP issued a statement, ordering her to apologise else, in their words ‘we will expose your galamsey activities.’

The National Women’s Organizer of the NPP according to the statement from the Atewa Youth Association is a galamsey 'queen pin with a decade of experience in the banned activity.

“Madam Kate Gyamfua has over the past ten years been mining in the Atiwa enclave and as at today holds the biggest mining concession in the constituency, and with this can she happily point to any project a community within the constituency has benefitted from her mining company?.”

Barely, two months after that statement, it has emerged that over eight excavators belonging to her mining company have been set ablaze by military personnel in the ‘Operation Halt’ drive.

Meanwhile, XtraGold Mining Company, the mining company which has Kate Gyamfuah as its General Manager has denied allegations it is involved in galamsey.

“These unlawful actions are a clear violation of the rule of law,” the company. Our company pays big money royalties, taxes, stool land fees”.

“We are socially responsible, and employ hundreds of local workers. At the same time that we are paying all these huge taxes, the military is burning millions of dollars of our mining equipment,” the company bemoaned.

The powerful Ashanti Regional Chairman of the NPP has often been accused without evidence as being the El Chapo of galamsey in Ghana.

The involvement of Wontumi in galamsey was highlighted by then Minority lawmaker Adam Mutawakilu in a July 2018 press conference in parliament.

“…The chief of Jakobu came out clearly [to tell me] that the CEO of the forestry commission and Wontumi, chairman of NPP in the Ashanti Region, are engaged in galamsey.

"It is a fact and a slap in the face of the president. I believe that the president is probably doing a cover-up for these people because the information we the minority have is that the CEO of the Forestry Commission, Sir John, uses his office to put signposts that certain areas are marked for reclamation, the natural fact is that there is serious galamsey going on in there. This is just to let the military not invade those places,” he said.

This claim by Adam Mutawakilu was premised on a statement by chiefs at Jacobu in the Amansie Central District of the Ashanti Region.

The spokesperson of the chiefs said "Sir John and the Ashanti Regional Chairman sent about 30 excavators into the forest with the protection of military men. As the chief of my community, I didn’t know anything about that.

"All we hear was that they were coming to reclaim the land. But not too long just about two weeks, they [Sir John and Wontumi] began illegal mining activities."

This led to a call by the Small Scale Miners Association of Ghana for the arrest of these two personalities but nothing happened.

It read in part: "The office of chairman Wontumi wishes to state unequivocally that Mr. Antwi- Boasiako is NOT directly or indirectly engaged or linked in any acts of illegal mining, neither is he engaged in any act of illegal mining in the Amansie area or in the said forest reserve, as alleged by the traditional leaders.

"It, therefore, considers the allegations as very unfortunate, especially coming from no mean persons, but the revered and respected traditional leaders of Amansie traditional Area."

Charles Bissue who then the secretary to the Inter-Ministerial Committee on illegal Mining was implicated an investigative documentary by Anas Aremeyaw Anas as an alleged enabler for galamsey.

Bissue allegedly facilitated for ORR Resource Enterprise, a company seeking to circumvent laid down processes to be given clearance for its mining operations.

The matter was referred to Special Prosecutor then Martin Amidu but Bissue was cleared of any wrongdoing by the Criminal Investigations Department of the Ghana Police Service before Amidu could finish with his investigations.

The allegation against the former Minister of Lands and Natural Resources was levelled by Kwabena Boaffoe Abronye, Bono Regional chairman of the NPP.

According to him, the main reason the Akufo-Addo administration lost its fight against galamsey in the first term was because Peter Amewu who was bent on ridding the country of galamsey was substituted for Asomah-Cheremeh by the president.

Abronye alleged on three different occasions - on Oman FM, Wontumi FM and Peace FM - that Asomah Cheremeh could not beat galamsey because he was a player himself.

"I wonder how people can diminish the presidency. It's not your fault. It's neither your father nor mother who toured the country to campaign to bring the party to power. All you are seeking to achieve is to amass wealth for yourself whilst the President struggles.

"A Cabinet Minister, a Peter Amewu successor, was arrested for his involvement in galamsey activities," angry Abronye DC said.

He continued, "The Tarkwa MCE arrested this Minister who had visited galamsey sites in Tarkwa to take money from the illegal miners. The former MCE and his Task Force accosted the Minister and his boys. The case is at the Tarkwa Police station. This happened in 2020," Abronye said.

Horace Ekow Ewusi was caught on tape discussing galamsey plans with a former Minister of Environment, Science and Technology.

In the said tape Ekow Ewusi who is the former NPP Central Regional Vice-Chairman was heard detailing to Professor Frimpong Boateng how they can use galamsey to finance party activities.

He stated: "The last time you met my MP [Elvis Donkor] in Parliament, he told you that he will also need a machine to work with and you even asked him to come and see me because I have a lot of these excavators."

Professor Frimpong Boateng however denied the content of the leaked audio in a GhanaWeb interview.