Loss of US$200,000 foundation seeds to be investigated 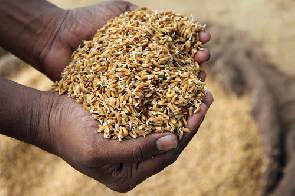 The Ministry of Food and Agriculture (MoFA) is to conduct a probe into the circumstances that led to 60 tonnes of foundation seeds valued at US$200,000 going bad at the port.

The Deputy Minister of Food and Agriculture in charge of Crops, Dr Ahmed Yakubu Alhassan, who gave the hint, described as strange the delay in the clearance of the seeds at the port, which eventually resulted in the seeds losing their efficacy.

He denied allegations that MoFA was responsible for clearing the seeds when they arrived at the port and urged the sector minister to conduct investigations into the matter, so that it does not happen again.

The foundation seeds arrived at the port in January 2016 but Prairie Volta Limited (PVL) which imported them, eventually cleared them at the beginning of September and after several tests on them, it was realised that they could no longer be used for the purpose for which they had been imported.

The General Manager of PVL, Mr Kojo Osae-Addo, said “they spent about eight to nine months in the container so they have been cooking on the sea. For seeds like these, within three months or so you have to plant them.”

Speaking to the Daily Graphic last Monday on a host of issues raised in the paper’s exposé on the Prairie Volta Limited (PVL), formerly the Aveyime Rice Project, Dr Alhassan said, “I am going to encourage the minister to cause an investigation to be conducted into that particular episode because 60 tonnes of seeds is not one kilogramme of seeds. It is worth $200,000.

“As for that particular issue, until we get to the end of it, I will not be a happy man and I am going to insist that investigation is conducted to ascertain why the PVL would import rice seeds and for whatever reason allow those seeds to be unusable,” he stated.

He said the entire seed industry was privatised, with MoFA as the regulator, explaining that before anyone can import seeds into the country, particularly that of food crops, “you have to ask for a permit from the MoFA” because according to him, there were sanitary and phytosanitary issues related to the transportation of germplasm globally to which Ghana was a signatory to.

The minister added that the Plant Protection and Regulatory Services designated as the national plant protection organisation had communicated the regulations to farmers on the fact that seeds cannot be imported or moved out of the country without passing through the MoFA.

According to Dr Alhassan, it was important to know where the seeds were imported from to assess and advise appropriately on the type of seeds that could be imported, so that unwanted organisms were not brought into the country.

He said because seeds were agricultural material, there was the need to also apply for tax exemptions, accompanied by the bill of laden and other documentation, “and based on assessment, we would then recommend to the Ghana Revenue Authority (GRA) or the Ministry of Finance to waive taxes on the material coming into the country.”

“I know how goods that are brought into the country under a certificate of emergency are treated and so the ministry would be the last to want to stand in the way of the PVL, in particular when the government itself had shares in the company,” Dr Alhassan indicated. “If this happens and it goes unchecked, I don’t know where we would heading towards as a country.”