Our love for the Black Stars is dead indeed 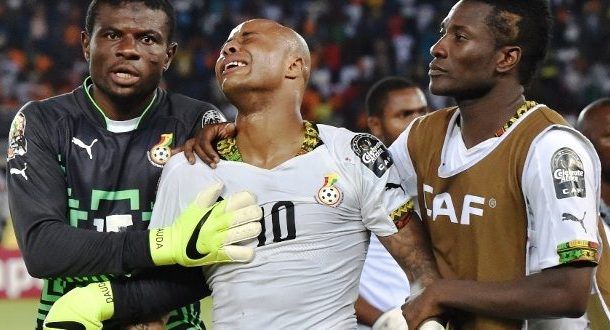 In the matter of love, be it platonic, romantic or sexual, one of the commonest and almost irreversible errors people commit, is when they turn to take their partners’ commitment, deep love and passion for granted.

And before they know it, they lose a gem. Then they weep over heartbreaks begging for forgiveness.

And truly, even if you are forgiven, you will most likely never get that same love, attention, and commitment from that individual again. So you see; it is almost an irreparable damage.

And this is the predicament of our once darling senior national team, the Black Stars.

The Ghana Football Association (GFA), the Ministry of Youth and Sports (Government) and the players of the Black Stars, took for granted the love, passion, commitment and the spirit with which the nation backed the team each time they played.

And they are paying for it dearly today – and it may be much worse in the coming months if the ‘dead support’ for the team fails to resurrect. And the hard truth is that; football is incomplete without the fans.

In fact, football fans, serve a purpose akin to lubricants. Lubricants reduce friction between surfaces in mutual contact, to ultimately reduce the heat generated when the surfaces move.

A lubricant may also have the function of transmitting forces, transporting foreign particles, or heating or cooling the surfaces – And this is what football fans are to the players on the field of play.

Sometimes even the adrenalin to play exceptionally well against all odds, is triggered by the mere inspiration drawn from the fans who are innumerable.

I was totally astonished on Friday October 7, 2016, to notice that the team that we once loved so much; was playing a crucial world cup qualifier in Ghana against Uganda, and it was without the euphoria and enthusiasm that accompanied their games.

In fact, I was even more shocked at my own disinterest in the game; which was showing on television, considering how passionate I use to be about our once national pride.

I had visited the Champion Restaurant at Adabraka that afternoon of the game to get lunch, which was unusual of me when Black Stars are playing an important game.

Hmmmm – At the Restaurant, the game was showing on Ghana Television (GTV), and to my amazement, there were only a few eyeballs watching the game. Many were either busily eating or queuing to have a taste of the enjoyable meals at Champion.

And when I passed through town shortly after that, I rarely saw people listen to radio commentary of the game, or watched TVs in shops by the roadside and other public places.

Talk about the game even on social media (Facebook) – at least on my page, was relatively less.

At that moment, I genuinely felt extremely sad for the team; despite the justified anger of many Ghanaians like myself against the team, the government of the day, and the Ghana Football Association (GFA).

It wasn’t a surprise when the team only managed a 1-1 draw after some of the players bought tickets for some children in Tamale to watch the game at the Tamale Sports Stadium; ostensibly to cheer them up.

But that act of benevolence was evidently not enough to fill the many empty seats at the stadium.

But why haven’t Ghanaians forgiven the team even after several apologies for the global embarrassment at the Brazil 2014 World Cup?

It’s been almost two years since the players of the senior national team; held the whole nation to ransom; and forced government to fly as much as three million dollars to pay them bonuses before they would continue the games.

They were not alone – several officials of the GFA and the Ministry; had their share of the booty.

And after they were paid with some of them teasingly kissing the cash on camera, they woefully underperformed, and shamefully returned home empty.

Thousands of dollars were also wasted by the Ghana Football Association (GFA) and the Ministry of Youth and Sports for Ghana’s general participation in that global football fiesta without proper accountability.

And as if that was not enough, the Government decided to bruise our wounds further, by wasting the tax payer’s money again, in the name of ensuring accountability and transparency.

The presidential commission of enquiry unravelled so much about mismanagement and corruption, yet no one was punished by the state for the mess. Instead, the President shielded the culpable officials from prosecution or any form of sanction.

Till date, nothing significantly has happened to the recommendations of the three-man committee, chaired by Justice Senyo Dzamefe.

The government’s sloppiness in cracking the whip by implementing the outcome of the investigations head-on; is undoubtedly the reason for the heightened resentment against the team.

Indeed, people can’t be fooled all the time – and clearly; the masses are wide awake, and will not applaud mediocrity by pretending that all is well.

And like Gilbert Keith Chesterton, an English writer once said, “When it comes to life, the critical thing is whether you take things for granted or take them with gratitude.”

The Black stars, the GFA, and the government of the day, chose the former- and the consequence; is the ‘dead support’ for the team.

I do not know how the broken hearts of the Ghanaian Black Stars’ lover can be resurrected; but one thing I know for sure is that; many do not care anymore about the team.
And whether they qualify for the 2018 World Cup in Russia or not, means nothing to them.