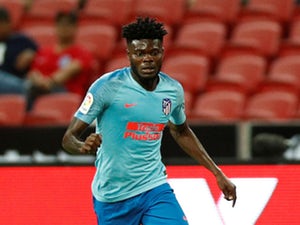 While the World Cup winner is said to be keen on working with compatriot Zinedine Zidane , United have indicated that they are unwilling to part ways with the France international.
Real are also aware that it may cost them well in excess of £100m to sign the 26-year-old, regardless of the fact that the player does not want to extend his contract at Old Trafford past 2022.
According to reports in Spain, Real are now assessing their options, with Partey now in the running to make a controversial switch across the city.
The Ghana international left a positive impression on Zidane when the two teams played out on a goalless draw in September .
Partey still has just under four years left on his deal, although that may not stop Real making an offer in one of the upcoming transfer windows.