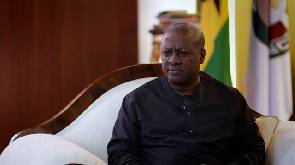 A Former Minister of State at the interior Ministry and Current Deputy General Secretary of the opposition New Patriotic Party (NPP) Nana Obiri Boahen, has disclosed that President John Dramani Mahama will go into history books as the worst leader the country has ever had.

He alleges that his management of issues relating to the economy and other sectors which are ingredients to the country’s economic growth has so far proven to be a disaster.

Comparing the current dispensation to previous regimes including the military, he said President Mahama has performed abysmally contrary to his own claims the country’s economy is on a sound footing.

“President Mahama doesn’t come near any of the previous head of states including the late Professor Evans Fiifi Atta Mills. He is incompetent and this has resulted in the country being saddled with corruption”, he alleged

Speaking to Kwame Adinkra on Abusua Nkomo, the private legal practitioner said the NDC led government has failed Ghanaians and should be quickly removed from office to pave way for Nana Addo and his NPP party to transform Ghana.

“President Mahama ‘is a visionless, incompetent and corrupt leader who has done nothing good to help raise the Ghanaian sinking economy under his leadership”, he claimed.

He stated that Ghanaians are tired of Mahama’s corrupt leadership and will kick him out come December 7 to bring back the New Patriotic Party (NPP) which is capable of implementing good economic policies to enrich the lives of Ghanaians.

”Ghanaians in general are yearning for a change and there is going to be a change. Mahama’s leadership has been full of corruption to the extent that, day in day out you hear District Chief Executives, MCE’s and government appointees squandering the funds with impunity’’.