Mahama has passed his exams - Dauda 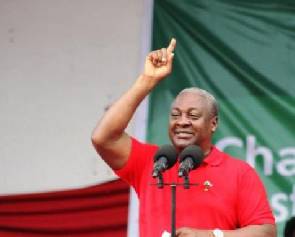 The Local Government and Rural Development Minister says President John Mahama deserves a second term because he has delivered on all front of the Ghanaian economy.

Collins Dauda says when Ghanaians take a cursory look at the water situation which "used to grind the nation"; the Mahama government has addressed the issue.

“When you go to Kpong in Tema, President Mahama has put in place equipment that is pumping 40 million gallons of water a day [uncharacteristic] of in the history of the nation,” he told teeming supporters of the NDC at the Cape Coast Sports Stadium during the party’s National Campaign Launch Sunday.

Acute water shortage across the country is not a new development considering the way water is managed in the country.

The cry for help has been thunderous especially as some water bodies residents depended on have all been polluted by galamsey operators – small scale mining works who have muddied the waterbodies.

But touting the President’s achievements, Mr Dauda said the government listened to the cry of the people and delivered the goods to them.
He believes “had it not been for President Mahama” the water situation would be worsening daily.

Watch more videos from the campaign below: