Mahama is innocent; only four of us know what killed Mills - Allotey Jacobs 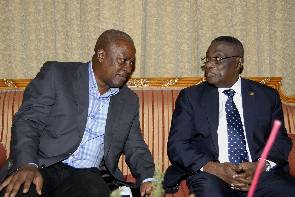 The cause of the sadden death of Late Professor John Evans Fifi Atta Mills has been a mystery perhaps to some of his family members and Ghanaians at large.

Majority of Ghanaians are yearning to know ‘exactly’ what killed the late president even though he appeared to be sick whiles in office.

The opposition New Patriotic Party [NPP] has over the years mounted pressure on government to make public the cause of President Mills’ death after alleging he was killed but government has been adamant to publish the cause of the late president’s death till now.

This has compelled some individuals to constantly barrage the NDC to produce a vivid detail of what killed the former president or who was behind his death if any.

The black and red poster is designed with a picture of a ‘not so happy’ looking Mills and a shadow of an unknown person carrying a knife in an attempt to stab him [President Mills].

The opposition believed President Mahama who was then vice to Prof Mills must be interrogated for his former boss demise.

But Central Regional Chairman of the NDC, Mr. Allotey Jacobs says President Mahama is “innocent” and knows nothing about even the sickness which killed Prof. Mills.

He told NeatFM's Akwasi Aboagye on his "Ghana Montie" show that only he (Allotey) together with three others have first-hand information about actually led to the death of the former president.

“Let me confirm this, we are just four people who knows about Professor Mills sickness. His two siblings [Dr. Cadman Atta Mills and Sammy Atta Mills], myself, and his long time bodyguard, Mr. ASP Adadei. Prof Mills was dear to our hearts, he shared his frustration, sickness and development with us [the four]”

“We knew the man very well and he knew us. Prof Mills once visited me at in apartment late-night when I was sick, we cried and we prayed together. People don’t know about this so they just get up and malign innocent people in this country”

“…What at all has President Mahama done? What sin has he committed? Just because God as anointed him to be president?” he quizzed

“Those doing that are just hurting the family [Mills family]. The man is dead and gone. Curse will be upon those behind this [he accused the NPP]. Death will run through their camp” he added