Make it third time lucky for me - Nana Addo to Ghanaians 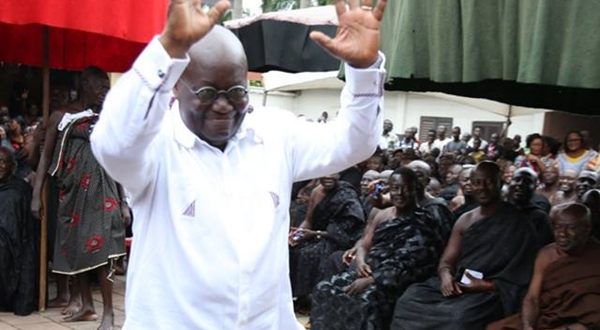 The flagbearer of the New Patriotic Party (NPP), Nana Akufo-Addo is hoping it will be third time lucky in his bid for the Presidency.

Nana Addo, speaking at a mini rally at Amenfi West on his tour of the Western Region, pleaded with Ghanaians push him over the top in the general elections on his third time of asking.

“I have tried the Presidency on two occasions. It did not work. Help me this time around. Help me bring the needed development into this country.”

Nana Addo’s first attempt at the Presidency was in 2008 where he lost to the National Democratic Congress’ (NDC) Professor John Evans Atta Mills in a run-off vote after leading in the first round of voting.

The next presidential race in 2012 saw him come short against the NDC’s John Mahama in a contentious election that culminated in a petition challenging the outcome at the Supreme Court.

‘Ghanaians have become too miserable’

Nana Addo in his address to the people of Amenfi took a swipe at the NDC-led government blaming it for the much lamented economic hardship.

“Ghana and Ghanaians have become too miserable, however I am urging you to have hope. God did not create us to be poor neither did he put us on this rich land to be por. It is bad leadership that is making us poor.”

He however expressed optimism that the NPP would win power in the December polls to kick-start a change in fortunes of the nation.

“Have hope that a good government is on its way coming to bring development, progress and prosperity to every part of the country without discrimination.”