A farmer from Akyem-Tafo Municipality in the Eastern region has allegedly brutalised his girlfriend for celebrating the NPP elections victory with money she stole from him and bought alcohol for the celebration.

The farmer whose name is not yet known was furious with his girlfriend for stealing his money and buying alcohol for the mega celebration and decided to take it out on her by repeatedly flogging her.

The series of violent strokes to her back with a dog chain has left permanent scars on the young lady who hails from Begoro.

The young lady who is cohabitating with the farmer is alleged to be in the habit of stealing his money and buying alcohol with it disregarding her boyfriend's constant complaints. 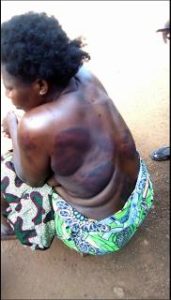 On Saturday, after getting wind of the NPP's election victory, she went out to celebrate and drink as usual and returned home very late in the night.

On returning home, the house was virtually empty and her boyfriend decided to take advantage of the situation and launch a vicious attack on his girlfriend (Maame Fante)

The marks on her body were seen by their neighbours the following day and questioned her. She admitted being beaten by her boyfriend who destroyed her mobile phone in the process.

She returned to her parents the following day who caused her arrest. He then pleaded with the family and the matter was dropped.