Man reveals plot to ship hundreds of guns to Ghana 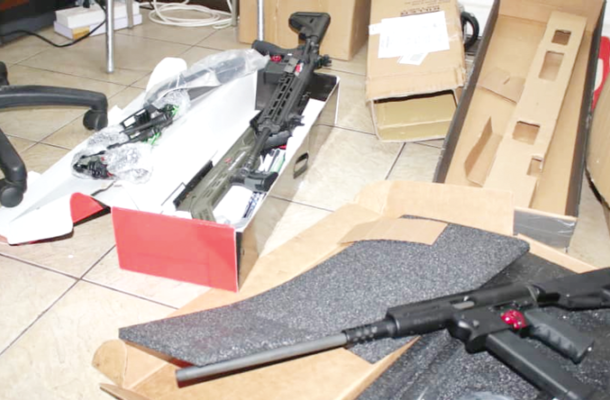 A Ghanaian living in Turkey has revealed a plot by some persons in Ghana to ship firearms illegally into the country.

The guns which are more than 100 pieces in three different sets of parcels have been wrapped in a silver lining depicting a toy gun to evade custom search.

In a video sighted by Ghanaweb, a man called Gabon, who is an agent who deals in import and export, stated that he was convinced to unravel the items in some of the bags his clients sent to him to be shipped to Ghana following his previous encounter.

According to him, his previous shipment to Ghana landed him in huge trouble which is still pending after it was found that some of his [what] contained firearms as well. - check this phrase again

The freight forwarder who has been in the business for 4-years said:

“I’m into cable business and I ship stuff as an agency. I remember last year I sent 2 containers and I know guns are sold in stores but sometimes I receive items which contain guns although most of the things I ship are phones and others.”

He added, “I was here when I received a call that one of my shipment contained guns and I denied knowledge of it because there are names written on the packages.”

Narrating how he discovered that his latest shipment contained several firearms, Gabon said, “I was here three days ago when I received a package from a man I will keep anonymous.

“His packages have been wrapped neatly in a bag. But after he left I decided to probe what’s in his bag because I don’t normally do that for his packages. He told me he would return soon but he never came so I decided to open it only to find these guns.”
According to him, this is not the first time such a thing has occurred to freight forwarders in Turkey, he revealed, “I have a friend here he also discovered a similar stuff in a sound system.”

He added, “I want to plead with the Ghana Embassy here to so the culprits are dealt with.”

There has been a rise in criminal activities in the country with robbers wielding pistols which the police are still investigating how the robbers managed to get hold of.
Source: Ghanaweb