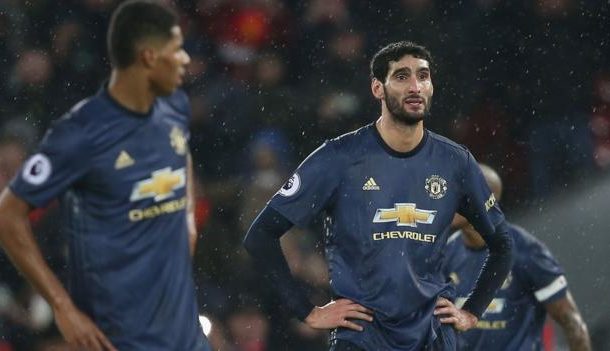 A defeat by rivals Liverpool left Manchester United with their lowest points tally at this stage of a Premier League season and ex-players and pundits put the boot into Jose Mourinho's side.
Three years ago, on 17 December 2015, Mourinho was sacked by Chelsea.
Just a day short of that anniversary and the question on many people's lips was: will the same fate be on the cards at Old Trafford?

Former United and England defender Gary Neville said on Sky Sports: "I think it will happen - my preference would always be to get to the end of the season. But the board room is so naive it's unbelievable.
"The minute he [Mourinho] came back from pre-season he was at it and the club was out of control. Nobody above him can handle him. They don't know what to do with him, they don't know what to say to him. They don't know what he's going to say at every press conference. It will cost a fortune to lose him now."
United were outplayed in Sunday's 3-1 loss at Anfield, which leaves them in sixth, 19 points off leaders Liverpool.
Former Newcastle and England striker Alan Shearer, speaking on Match of the Day, said: "At the moment in that Manchester United team, only David de Gea is performing to his potential.
"Something has to change at the club. The board either has to get rid of the manager or back him and let him get the players he wants because there is a lot of work needed in that team. There's a lack of ability.
"The board clearly didn't back him in the summer. Jose had his targets and for whatever reason they weren't allowed to come in.
"But it's not always the manager's fault. I don't think many United players came off on Sunday thinking they had done their best."
"If you came down from the moon today and knew nothing about football, you'd say United are an average Premier League side, nothing more," said former United captain Roy Keane.
"They are Manchester United of the 1980s. They can be a decent cup team."
Speaking on BBC Radio 5 live, ex-Leicester City and Wales midfielder Robbie Savage added: "United have been so poor, pathetic.
"There can be no excuses now. They've spent plenty of money, they've brought players into the club - you've got over £100m on the bench. To be this far behind is ridiculous, really. It's not acceptable.
"Everything that United used to be, Liverpool are now."
His sentiment was echoed by Neville, who added: "Liverpool are streets ahead. Not one of the United midfielders can pass a football. I find it staggering. United were awful. It's not good enough."

United have picked up 26 points after their first 17 Premier League games, their worst points haul in the top flight at this stage since 1990-91 (26 points).
They have conceded 29 goals in the league this season - one more than they did in the whole of the 2017-18 campaign (28).
They are 19 points off leaders Liverpool, 11 points off the top four and closer to the relegation zone than the top of the table.
They have one win in six league games and a goal difference of zero.
Liverpool's 19-point advantage over United is their biggest after the first 17 games of a top-flight season.
Liverpool had 36 shots on Sunday - the most United have faced in a Premier League match since Opta started recording shot data in 2003-04.

'The club needs to reset'
Mourinho, who joined United in 2016, signed a new deal with the club in January until 2020.
He won the League Cup and Europa League in his first season and finished second in the Premier League last term, but has struggled on and off the pitch in 2018-19.
His side were knocked out of the Carabao Cup in September, left to target fourth place with less than half a season gone and produced underwhelming performances as they qualified for the last 16 of the Champions League.
Off the pitch he has publicly remonstrated players and his relationship with Paul Pogba, who he stripped of the vice-captaincy in September, remains rocky.
"Every press conference with Mourinho is a soap opera," said former Celtic and Chelsea striker Chris Sutton on BBC Radio 5 live.
"The bottom line is, is he getting the best out of this group of players? And we all know the answer.
"He's in denial, Jose - he's in cloud cuckoo land. Liverpool were better all over the park for 90 minutes and he says: 'For sure we'll finish in the top six.'
"Is that really what United fans want to hear? They finished second last season."
Savage said: "I can't see the pattern of play, I can't see the direction. Where's this United team going under Mourinho?
"Jose, you pick the players, you put them on the pitch to perform for your football club and they've not done it once again. They're not going to win the Champions League, they're not going to get in the top four. Where are they going?"
Neville added: "Fans don't want to go to the games. And that's not just now. It was the same under David Moyes - that was the manager's fault. The same under [Mourinho's predecessor Louis] Van Gaal - that was the manager's fault. Mourinho - that was the manager's fault.
"The whole club needs to reset."
'Pogba's days are numbered'


It was another game on the bench for PogbaFrance's World Cup-winning midfielder Pogba, the world's most expensive player when United bought him back from Juventus for £89m in 2016, was left on the bench for the third successive league game.
He was the only United player selected by BBC Sport readers in their Liverpool v Manchester United combined XI before the match.
But on Sunday, for the second game in a row, he was an unused substitute. So is this the end of Pogba's time at Old Trafford?
"I don't think Pogba has a future at the club," said Savage. "The big question is, who will be at United longer, Mourinho or Pogba?
"United have been embarrassed here today and you've got Paul Pogba, who cost £89m, unused on the bench."
Keane added: "Pogba's days are numbered. They won't sell him in January but he'll move on. It's no big deal, he's left United before."
Former Liverpool midfielder Graeme Souness, speaking on Sky Sports, said: "Pogba must be thinking: 'Surely I'm better than Marouane Fellaini? Surely better than Nemanja Matic?
"But if he had a better attitude he'd be better than any midfielder in the Premier League."