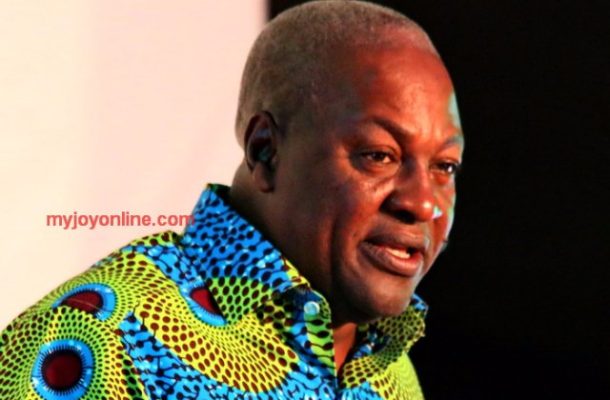 Technical and vocational education will be given its pride of place in the next government of the National Democratic Congress.

That's according to President John Mahama during his novel presentation of the highlights of the 2016 manifesto of the NDC.

With three months to go for the 2016 elections, political parties have been criticized for failing to make public the manifestos which will form the basis on which the electorate will make a decision on December 7.

The governing NDC promised to launch its manifesto on Saturday September 17, 2016 in Sunyani but with just few days to the launch, the president in a live broadcast outlined key highlights of what many civil society groups, party supporters, media men women should be expecting in the manifesto when it is unveiled.

The manifesto, he said has been divided into four thematic areas which are;

b. A strong and resilient economy for job creation

The president said the last four years was dedicated to investing in people and developing their talents in order for them to "create, innovate and transform nation."

"We have been vindicated in improved education outcomes," he said, adding, "I am feeling inspired by successes chalked and has abiding faith in Ghana and in the future of the nation."

The president outlined a number of successes his government chalked in education in the last four years and made promises to deliver more if he is retained in power.

The president touted a 97% success in complementary basic education program school enrolment and a gender parity especially at the basic level.

He said out of 200 SHS Community schools promised, his government is feverishly working on 123, having already commissioned 10 of them. He said all the 200 will be completed in his second term.

Saddened by the erroneous impression that technical and vocational students are drop outs, the president said he would work to change this perception by building a new college of education to train instructors to teach technical skills. That College of Education will be sited in Agona Swedru, he emphasised.

The president also promised to make his second term a "teacher first agenda" by providing accommodation for teachers who accept posting to rural areas and will place emphasis on establishing a link between education and industry.

There will be increased career counseling in order to direct the students into places where their jobs markets are needed most, he indicated.