Mankessim murder: How prime suspect's son collapsed when a body was exhumed in his father's house 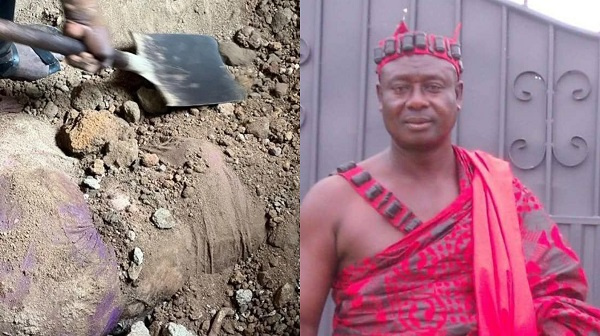 The exhumation of the body of a trainee nurse has sent shock waves through the town of Mankessim in the Central Region.

One of the residents who was overwhelmed by the shock of the incident was the son of the prime suspect in the murder of Georgina Asor Botchwey, Nana Clark Onyaa.

According to the Assemblyman of the area, Alex Kojo Appiah, the son of Nana Clark, who was present when the deceased's body was exhumed from inside his father's building, collapsed out of shock and had to be given medical attention.

"When I came to find out that the body had been exhumed and taken to Cape Coast, I inquired of the whereabouts of his children. I was informed that the son fainted when the body was exhumed and had been rushed to the Roman Hospital for medical attention," the Assemblyman said.

His arrest followed the confession of an accomplice in the kidnap, murder and secret burial of Georgina Asor Botchwey.

The second suspect in the case is Pastor Michael Darko Amponsah, popularly known as Osofo Kofi.

Osofo Kofi, according to reports, is the fiancé of the deceased's elder sister.