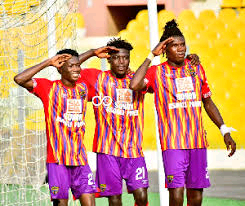 Coach of Accra Hearts of Oak Samuel Boadu has announced his squad for Sunday's encounter in what has been christened the "Mantse Derby".

The Phobians are playing as guest of the Dade Boys in their Matchday 28 encounter at the Accra Sports Stadium.

Boadu has largely kept faith in the regular squad, which he used in last Wednesday's victory against Liberty Professionals in Round 64 of the FA Cup.

The Phobians lost by 2-0 in the first leg against Olympics but a victory in the return fixture consolidates their chances of winning the league for the first time in 12 years.

Below is the Hearts of Oak squad for Great Olympics clash