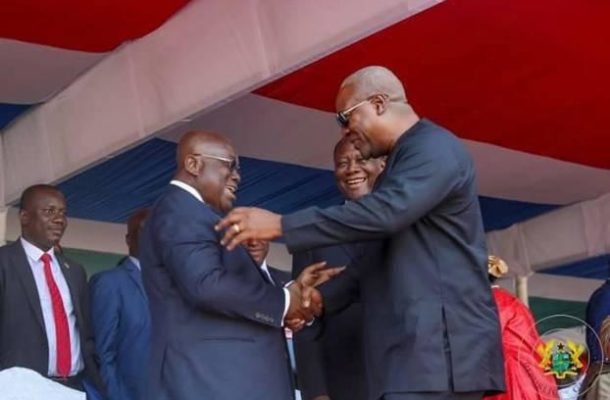 It's increasingly becoming too clear and clearer to the bewilderment of well-thinking Ghanaians that the Granpa of the Akyem Sakawa Boys, Nana Akufo-Addo is nothing but a Scumbag.

A scumbag who over the years have hidden behind his fake British accent to deceive the shallow-minded NPP faithful that he's a demi-God and one whose mere words can turn Ghana into a First World Country. Otherwise how can this empty-headed Nana Addo who was Nicodemusly called to the Ghana Bar on a Sunday tell Ghanaians that he will turn Ghana into a Mecca in 18-months during his administration, but all what we have witnessed in the past 3 and a half years is stealing, grabbing, stealing and grabbing by his family members and close associates.

But I'll leave the stealing, grabbing and scratching by Sakawa Nana Akufo-Addo for another time. Today I'll want to drum home to Ghanaians that when in-coming President Mahama drops any policy he intends to roll out in 2021, Sakawa Addo runs with his hooligans to either suspend something, say that they will also do same or they are working behind the scenes to do same.

Indeed, Nana Addo has become so desperate, despicable, and so helpless that he goes to bed praying that he will wake up and hear something new from John Mahama for him to adopt as part of his talking points during his campaign stops in various parts of the country.

When scumbag Nana-Addo whom I'm aware does not read anything sent to his desk because of his lazy approach to all issues, signed that deceptive luxury tax into law, this did not go down well with John Mahama, who immediately came out to say that when he returns to the Flagstaff House he'll cancel that luxury tax. Sakawa Addo sent his goons out to slam John Mahama.

But later when car owners who trooped to the offices of the Driver and Vehicle Licensing Authority to renew the registration of their vehicles realized that Sakawa Addo was just out to rob them, murmur started spreading in the air. John Mahama did not relent but promised that he'll scrap that law when given the nod again to govern the country. Panic immediately set in so Sakawa Addo ran like a hare to abolish that law. When John Mahama Coughs Sakawa Nana Akufo-Addo Acts!

Fast forward to 2020. Covid-19 came from nowhere to attack the world in an unimaginable measure, Ghana inclusive. When ideas were being brainstormed as to how to contain the pandemic and also help vulnerable Ghanaians during the lockdown, many Ghanaians threw in their ideas here and there.

But Kwaku "Ananse" Addo who gleefully was looking to score political points to resuscitate his floundering 2020 campaign decided to go solo in order to milk the pandemic for his parochial interest. John Mahama stepped in and told Sakawa Addo to provide free electricity and water to vulnerable Ghanaians, but his suggestion was promptly dismissed by Sakawa Addo. It however did not take long for Sakawa Addo to see wisdom in what Mahama was saying so he went ahead and provided some scanty reliefs on electricity and water to Ghanaians. When John Mahama Coughs Sakawa Nana Akufo-Addo Acts!

But when the Okada operators heard that the NDC have put the regularization of the Okada business in their Manifesto, they drove in droves to lend their support to John Mahama and the NDC in the upcoming 2020 Elections. The 76-year old Sakawa Addo, who now cannot think right went into panic mode and decided to salvage the situation by sending his lying brigade headed by the discredicted Kojo Oppong Nkrumah, that they have been working all along quietly to regularize the Okada business. When John Mahama Coughs Sakawa Nana Akufo-Addo Acts!

I'm simply happy that the Okada operators who are very much aware of the disdain the NPP goons have for them are able to decipher the NDC truth from the NPP chaff. They know Lying Sakawa Akufo-Addo very well. And they also know John Mahama.

Helpless, Clueless, and Scumbag Nana Addo, came out with a "by force" national service Licensure Exams for trained teachers nationwide for the first time in Ghana's history. This uncomfortable, bogus situation is not sitting well with all the teachers.

John Mahama who saw no wisdom in this decision by Sakawa Addo, who to date cannot mention just one person as his classmate during the then six-month course at the Ghana School of Law, (Because he was never there), stated on various platforms that he will abolish that Licensure Exams when voted into power.

Panicky Nana Addo moved in with speed to announce that he has suspended the 2020 Licensure Exams just to appease the teachers and get their votes on December 7.

These teachers should remember, I want to repeat myself, these teachers should remember that they have been trained to know the difference or meaning between cancellation and suspension. Whilst Mahama intends to cancel the Licensure Exams Sakawa Addo simply wants to suspend the Licensure Exams for 2020 but bring it back in 2021 in case he wins. When John Mahama Coughs Sakawa Nana Akufo-Addo Acts!

John Mahama again saw how Sakawa Addo led by his "Chacha" Finance Minister have been slapping taxes here and there to rob Ghanaians.

We have the Communication Service Tax (CST) introduced in 2008 by then President Kuffuor as an ad valorem rate of six per cent. But to rub it in our faces "Chachaman" Ofori Atta again increased the CST from six to nine per cent (an increase of 50%).

Mahama, who was unhappy, boldly stated that, that tax was senseless and unhelpful to Ghanaians so he will scrap it when Ghanaians help him to assume office again. But Nana Addo who is on an ideas stealing spree has now come out to say that from today September 15, 2020 he is going to reduce the CST by 4%. When John Mahama Coughs Sakawa Nana Akufo-Addo Acts!

The last time I checked we don't live in a Communist world, whereby we need to do or perhaps think in the same way. Even China is changing. So what went into the bloody head of Sakawa Nana Akufo-Addo into thinking that all Ghanaians should drive VW vehicles. I mean how on earth can Nana Addo bolding pass into law that from November 2020 he was not going to allow any Ghanaian to import into Ghana any salvaged vehicles because he Sakawa Addo wants to protect the sales of VW and also force Ghanaians to patronize VW vehicles? What's in that decision? Does Sakawa Addo owes some shares in that business since Nana Addo and the NPP never do anything for free?

So when John Mahama saw the machinations of Sakawa Addo, he vowed to scrap that bogus law banning the importation of salvaged vehicles to Ghana, because that law by Sakawa Addo (who is famously known for collapsing businesses) was simply aimed at collapsing the businesses of second-hand car dealers in the country.

But when the second-hand car dealers started to give John Mahama some political traction, Sakawa Addo moved in with Usain Bolt's speed in saying that he has suspended the implementation of the law on salvaged vehicles. When Mahama Coughs Sakawa Nana Akufo-Addo Acts!

But Ladies and gentlemen who deal in second-hand cars and patronize them, I'm passionately imploring you not to fall for these gimmicks by shallow-minded, crowd-follower Nana Addo who is being blown around by the Mahama wind everytime. His suspension of the ban on the importation of salvaged vehicles into Ghana is pure political gymnastics. All what he's telling you guys is that he is looking for your votes, but if you make the mistake and vote for him he'll implement the ban on the importation of salvaged vehicles in 2021.

Nana Addo introduced the free SHS. We all know that the program was hurriedly rushed so it still has serious defects. In order to make it better John Mahama has come out with measures to improve the free SHS. One of them is to include private schools in the free SHS program. Again, Sakawa Addo and his goons came out to talk trash on what Mahama intends to do. But when they realized that their hollow arguments were falling apart, Nicodemus Nana Addo has Nicodemusly gone behind the scenes seriously talking to the private schools that he also has plans to include them in the free SHS program. Nana is so so dubious. So dubious for this country. But you can at least credit him for one thing. When John Mahama Coughs he at least Acts!

Due to the bogus introduction and implementation of the free SHS, there are simply no adequate infrastructure facilities to contain the high numbers of students, leading to the introduction of the double-track system, which is creating a lot of pregnant students and added problems for parents.

So John Mahama has promised Ghanaians that apart from building enough facilities to contain the high numbers he will also abolish the double-track system when he is sworn into office, God will January 7, 2021.

When mothers who have seen their kids sitting at home for a whole year without doing anything due to the Covid-19, hailed the decision by Mahama to abolish the double-track system, hopeless and helpless Sakawa Addo sent his deputy education minister responsible for Pre-tertiary Education, Dr Osei Yaw Adutwum to disclose that they are ready to abolish the double-track system in the next few years after putting in strategic measures. So you see how Sakawa Nana Akufo-Addo Acts when Mahama Coughs?

I leave the rest to Ghanaians to put John Mahama and Sakawa Nana Akufo-Addo to test. Which of these two leaders do you trust? Which of them will be true to his words? Is it the talking cricket Kwaku Addo or "Ayebida" He's Done It Before John Mahama?

God bless you all as we move closer towards December 7!

BEN FOSU 10 months ago
Foolish writer, Fiifi Tanko. Why on earth you call a President a "Sakawa" with other insulting names. You wrote this because of your incompetent Mahama who cast insinuations like a rivary wife. God will punish Mahama again with a BIG LOOSE. Wise up