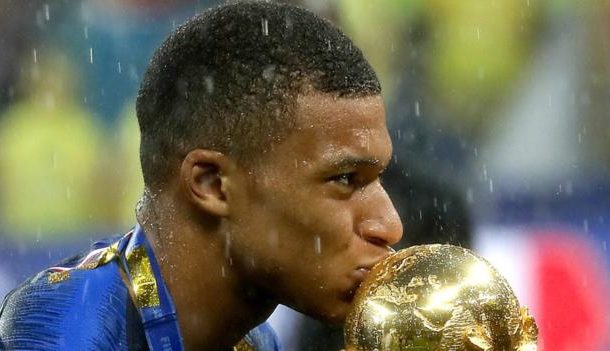 Lionel Messi and Cristiano Ronaldo are "handing over their crown" as the world's best players to teenage France forward Kylian Mbappe, says former England defender Rio Ferdinand.
Mbappe, 19, scored his side's fourth goal as France beat Croatia 4-2 in the World Cup final in Moscow, and won the tournament's best young player award.
"He is the guy who will be standing up on that Ballon d'Or podium in years to come. Easy," added former Manchester United Ferdinand.

"I hope my old club are chasing him. He has that connection with Paul Pogba too."
Paris St-Germain forward Mbappe is only the second teenager to score in a World Cup final after Pele in 1958.

World Cup 2018: Kylian Mbappe goal stretches leadRonaldo, 33, and Messi, 31, have been considered the best players in the world for a decade, winning the past 10 Ballon d'Or awards between them.
Mbappe scored four goals in Russia as two-time winners France were crowned world champions for the first time since 1998.
"There is already maturity beyond his years," added Ferdinand.


Pele helped Brazil win the World Cup in 1958, 1962 and 1970Former Germany striker and manager Jurgen Klinsmann, speaking on World Cup Match of the Day, said Mbappe looked like he had been playing in France's team "for 10 years".
"There is so much to come down the road," added Klinsmann.
"He is shaking up the market. With Ronaldo moving [to Juventus] and [Paris St-Germain's] Neymar being linked with other clubs, where is it finishing with this kid?"


Kylian Mbappe scored four goals at the 2018 World Cup against Peru, two against Argentina and Croatia

'Mourinho needs to unlock Pogba'
Pogba returns to Manchester United a world champion after becoming the first Premier League player to score in a World Cup final since Arsenal's Emmanuel Petit in 1998.
The 25-year-old joined United for a then world record £89m in August 2016 but fell out of favour at times during the 2017-18 campaign.
He was left out of the starting line-up by boss Jose Mourinho for both legs of United's Champions League last-16 defeat by Sevilla.
"Pogba was immense - especially in the second half," said Ferdinand. "The pressure was on and he has to come to the fore. There's a huge price tag to his name.
"He has had a tough season in terms of the media and people from within the game calling him out in a Manchester United shirt.
"It's down to Jose now to unlock this Pogba we saw at the World Cup because he was responsible, he stood up to a lot of hard tests in midfield and was a talisman for this team.
"For some reason the jigsaw puzzle hasn't been put together properly in a Manchester United shirt.
"The way the team plays, I think 'are they getting the ball into him in the right areas?' He's not receiving the ball quickly enough.
"Is he being put in the right positions? These are the questions a manager has to work out."

How did the players rate?

'Not the best to watch - but worthy champions'
France edged past Australia and Peru before being held to a goalless draw by Denmark in the group stage.
Didier Deschamps' side then overcame Argentina in a seven-goal thriller in the last 16 before beating Uruguay and Belgium to make the final.
"They have not been the best to watch but they know how to win football matches," added former England winger Chris Waddle on BBC Radio 5 live. "They have managed the tournament very well.
"You have to say Didier Deschamps' gameplans have been great without being entertaining. He has won the World Cup and that's what he came here to do."
Ferdinand added: "France have been criticised in the group games but they adapted to each and every team they played. To win you can't always play your own way."

World Cup 2018: France 4-2 Croatia highlights'Croatia return home heroes'
Few expected Croatia, who had failed to advance beyond the group stage at their previous three World Cups, to reach the final before the tournament started.
Despite losing to France, Alan Shearer said Zlatko Dali's side will return home "heroes".
"Croatia deserve great credit because they kept going. They were behind in every knockout game and they fought back," added the former England captain.

World Cup 2018: Howler from France goalkeeper Hugo Lloris gives Croatia lifelineKlinsmann said Croatia deserve "so many plaudits".
"They have given us so much joy in the tournament," he added.
"You still look at them and they will be one of the favourites for the next European Championships in two years' time, but they found a France team that knew how to kill them off in the second half."
'Best final since 2002' - what the fans said