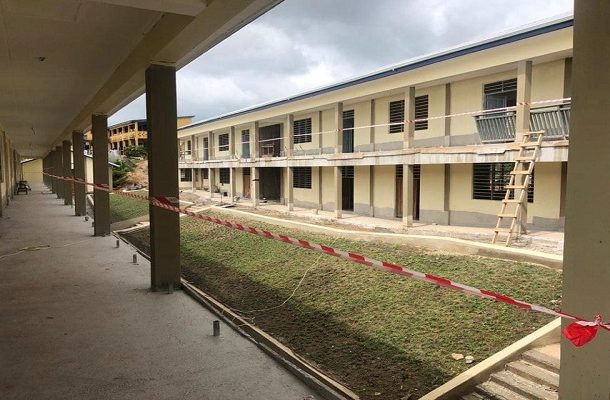 The Municipal Chief Executive (MCE) for Nzema East in the Western Region, Hon. Frank Okpenyen has been applauded for championing community development through projects in the area.

Hon. Frank Okpenyen is said to have flooded the Nsein Senior High School with massive projects making the school one of the best in the Municipality.

The Constituency Executives of the governing New Patriotic Party (NPP) in the Evalue-Ajomoro constituency who applauded the MCE indicated that it will be unfair for anybody to say since Mr. Frank Okpenyen has done nothing for the municipality since he was appointed as the MCE.

Revealing some of the developmental projects which the MCE has championed, the Deputy Constituency Secretary of the NPP, Mr. James Kainyah said the MCE has skillfully lobbied for the asphaltic overlay of the Nsein town roads.

According to Mr. James Kainyah, the MCE must also be commended for his effort in constructing a 500-capacity bed dormitory for the Nsein Senior High School through TULLOW Ghana Limited.

On job opportunities, the Deputy Secretary revealed that some youth in the area have been employed at the Ghana Gas Company in the Ellembelle District through the hard work of the MCE.

"In 2018, the Nzema East Assembly under the leadership of Hon. Frank Okpenyen was deeply involved in the organization of the Nsein Kundum celebration. The MCE Hon. Frank Okpenyen was also present and fully participated in the launching of the 50th anniversary of Awulae Agyefi. It was through this that the MCE and the MP in collaboration with the chiefs invited his Excellency the Vice President, Dr. Bawumia for the 50th Kundum celebration", He intimated.

He added that the MCE in 2019, collaborated with the Nsein Traditional Council to celebrate the 62nd independence anniversary (6th March) at Nsein. He further added that several road projects are still under construction in the area.

"The road from Avrebo Junction through Avrebo, Ahunyame to Adelekeso which falls under Nsein Traditional council is under construction. The Assembly under the leadership of Hon. Frank Okpenyen has constructed a new road from Nsein town to the light industrial area. This has reduced the traveling distance from Nsein to the business center", He added.

According to him, the entire Evalue-Ajomoro Gwira Executives of the New Patriotic Party are satisfied with the achievements of the MCE.

He is, therefore, pleading with President, Nana Addo Dankwa Akufo-Addo to retain Frank Okpenyen as the Nzema East MCE to enable him to continue his good works.