Medal for determination! Brave French athlete suffers a VERY embarrassing stomach problem and collapses in 50km race...but still gets up and tries to finish 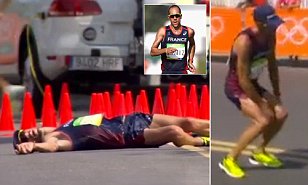 A French athlete collapsed during the 50km walk after suffering from stomach trouble - only to get back to his feet and finish the race. 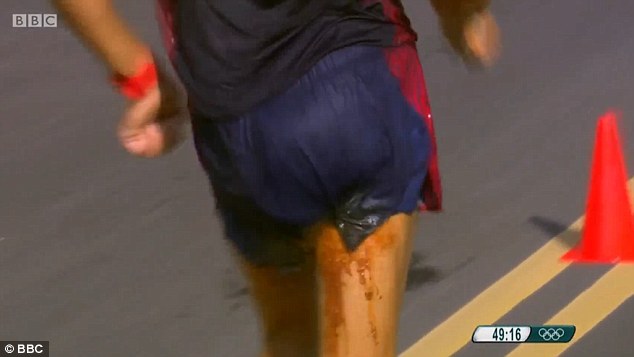 Diniz was spotted by cameras struggling in the race about 45 minutes in and apparently defecated during the race
 
Diniz pauses against a barrier once again, shortly after collapsing about two and a half hours into the race
It had been reported by French publication L'Équipe that race favourite Diniz had been suffering from a bad stomach in the lead up to the event.

Shortly afterwards, and with more than a minute's lead, the athlete collapsed by the roadside, allowing others to pass.

In a moment of solidarity, the man going in to the lead, Canada's Evan Dunfee, picked up the fallen athlete back to his feet as they continued with the race.