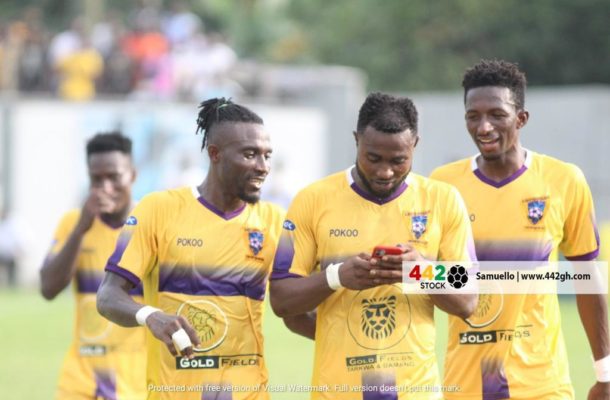 Prince Opoku Agyemang on Sunday caused a stir during Medeama's 3-0 win against Ebusua Dwarfs with his goal celebration.

Amed Toure, Ibrahim Yaro and Prince Opoku Agyemang scored in the second half to record their fourth straight win in the second round of the campaign.

After scoring the third goal, Prince Opoku Agyemang went to the touchline took his mobile phone and started sending a message to an unknown person.

The mauve and yellows who had a shaky start to the game dismantled their guests following an outstanding second half display.

Medeama SC kept hold of their place at the top of the table after posting a 3-0 win against Mysterious Ebusua Dwarfs at the Akoon Park on Sunday.

It was later revealed after the match that the striker was sending a text message to his soon to be wife Linda Frimpomaa Sefah.

The pair will next week tie the knot in Kumasi for their marriage.

Since returning from South Africa, Prince Opoku Agyemang has been in good form as he has scored five goals in seven matches since the beginning of the second round.