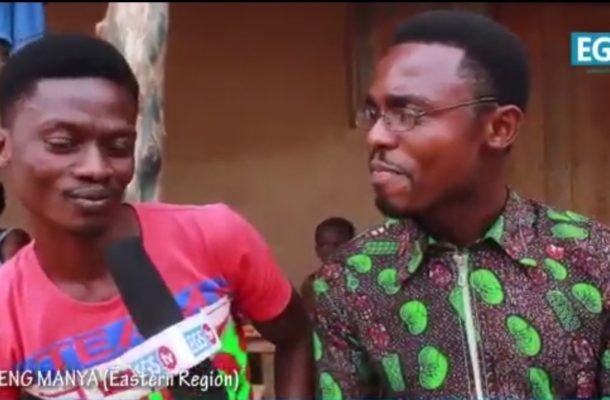 When all hope is lost and life begins to weigh you down, you have no choice; you either give up on life or give in to desperation. Such is life.

So many people who have been confronted by difficult situations in life at a point in time have had to battle it out with tough decisions when there seems to be no way out.

The saying: "desperate situations calls for desperate measures" best sums it up all for 24-year-old Thomas Larnyo, an alumni of Manya Krobo Senior High School in the Upper Manya district of the Eastern Region whose dream of becoming a medical doctor in the near future in a bid to save lives completely proved abortive.

The once brilliant student, is now completely reduced to the level of a common fisherman due to desperation for survival. This is due to the circumstances beyond his power and control.

It is no fault of Thomas to be born in Akateng Manya, a typical rural community you are likely to find within the Upper Manya District of the Eastern Region. A village where none of its inhabitants can ever boast of electricity or power supply since the days of Adam just to help them appreciate the beauty of their surrounding when the night falls, if nothing at all. How pathetic?

Not to even talk of an availability of sufficient portable drinking water which is a basic necessity to help them live their normal lives and enjoy cooking, bathing and drinking and to even cater for the hand washing protocols in the wake of the coronavirus pandemic.

Looking at the myriads of challenges the community dwellers are confronted with on daily basis, Thomas believes the only way out of trouble is to strive hard and ensure that his future dreams are achieved.

Mr. Larnyo said he’s woes began during the days when he was pursuing his basic education. However, upon completion of school, his struggles suddenly intensified.

"After completion of BECE in 2015, I couldn't continue immediately due to lack of money. I sat in the house for a year before I further got enrolled into the Manya Krobo Senior High School where I offered Science as a course ".

"My aim was to further my education to a higher level so I can land a job as a medical doctor in the near future but due to lack of financial support, I ended up becoming a fisherman just to survive”, Thomas said, while narrating his predicament in an interview with Mr. William Boadi of Educate Ghana Summit.

Akateng Manya is one of the 250 villages under the Upper Manya District of the Eastern Region. With a population of approximately of a little over 600 inhabitants whose main occupation are farming and fishing, the village is located eight (8) miles away from the Asesewa Township.

With its intimidating challenges, the community, can hardly boast of social amenities like portable drinking water, electricity supply including infrastructure for schools to accommodate students in order to promote teaching and learning which compounds problems of residents.

Sadly enough, the only borehole facility that serves the community with portable drinking water, unfortunately was sited at the outskirt of the town which makes it difficult for the inhabitants to reach therefore they resort to fetching water from a nearby river which equally serves as a source of drinking water for animals like cow, sheep, goats etc.

To the residents, their greatest worry is the absence of electricity power to illuminate their community let’s alone help school children to study at night. A situation which has compelled many school children to trek out of town for hours to a neighbouring village called Akateng only to study their books at night especially during examination periods.

Thomas Larnyo is equally not an exception to the above predicament during his school days.

He recounted: "When I was in JHS 3 in 2015 preparing to write my BECE, there's no light here so whenever we want to learn at night, we have to walk for like one hour and thirty minutes before reaching the next village (Akateng) before we can study our books and later trek back home which is a big blow to us".

According to him, the unfortunate condition contributed woefully to his poor performance in school and eventually ruin his chances of realizing his future dream including his colleagues.

Thomas has therefore appealed to government, Non-Governmental Organisations (NGOs), Civil Society Organisations, philanthropists and other benevolent bodies to quickly come to their aid and help solve their problems.

For him, seeing electricity connection extended to every nook and cranny of his village to the benefit of all and sundry especially school-going age children will be his greatest joy in life. But that wish for now only appears to become a mirage when all hope seems to be lost.

When the Member of Parliament (MP) for the area, Hon. Joseph Tetteh was contacted by the Executive Director of Human Rights Reporters Ghana (HRRG), Mr. Joseph Wemakor in a telephone interview about the plight of the residents, he admitted being aware of the bane of the community but was emphatic not knowing exactly when these problems will be fixed.

He said: "yes, I'm aware they don't have electricity but for water supply, I'm not particular or much aware of their situation".

Mr. Tetteh further explained that not only Akateng Manya is surmounted by the issue of power supply among others but there are lots of other villages within his constituency who are also faced with similar situations.

He however noted that hope is not yet lost, adding, "I know a lot of people who voted me into office and I knew I have to do something to help them but it will take time".

"You see even my constituency chairman is from this place (Akateng Manya) so we're thinking about them just that things are not going that fast but hopefully by the end of the year, things will be sorted out", he posited.

When asked what measures are being put in place by his outfit to get particularly unemployment issues in the area resolved, his only reply was: "Unemployment issues are everywhere. For that one it’s a general problem".

For his part, the District Chief Executive Officer (DCE) of the area, Felix Odjao Nartey also confirmed there’s a problem with electricity or power supply in area.

According to him, the problem is a generic one which cuts across many areas within the district. He further noted that it’s an age-old problem but assured plans are underway to get it fixed within the tenure of his office.

Mr. Nartey could not explain why such a problem still exists since from time memorial when asked. These are communities he was born and bred in and even grew up to currently hold a position as a District Chief Executive Officer.

"Hahahaa, (giggling), that is a question I cannot respond to. I have been DCE for only three (3) years so I can only respond to what I have been doing", he posited. So what at all has he been doing in the name of work?

He maintained that the previous leaders who served the district could have given a better answer when spoken to, adding, "what I can speak about is what we are doing currently to get the light fixed".

"We have applied to the Ministry of Energy, we are working around it and I'm sure that at our time, there will be electricity supply to all the affected communities within the district" he stressed.

Well, it’s obvious these burning challenges of the residents of Akateng Manya and its neighbouring villages will never end today. How on earth can the good people of Akateng Manya and its environs ever live a life of dignity just like others in many parts of the country and around the world? (global village). Just like every human being deserve, their basic necessities of life are not guaranteed which is a violation of their basic human rights.

For now, the inhabitants of Akateng Manya and including other 249 communities within the Upper Manya District in the Eastern Region can only hope for better since their leaders have only assured them of keeping their hopes alive. Maybe for eternity instead of delivering on their promises.

Until any ‘Good Samaritan’ steps in to rescue these unfortunate ones from their plights including that of the beleaguered Thomas Larnyo who gave up on his future dream of becoming a medical doctor only to end up as a fisherman due to his predicament, they will forever continue to bear the brunt of living in darkness, wallow in abject poverty and despondency for a lifetime.

The writer is a seasoned journalist and the Executive Director of Human Rights Reporters Ghana (HRRG). He also doubles as Head, Media, Communication at the PLO Lumumba Foundation, Ghana Chapter