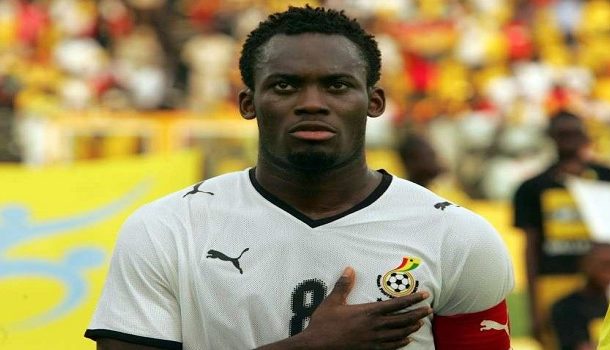 Michael Essien’s international career was over long before he officially announced it on Ghanaian television this week , but while he will go down in history as one of the Black Stars’ greatest players, injury denied him his finest hour.

On one hand, Essien’s legend has been establishe and firmly established—regardless of what he achieved with the national side.

He’s one of the most decorated African players ever, with only really Sammy Kuffour—of his compatriots—able to rival him in terms of honours.

The Bison has represented a handful of European giants, with spells at AC Milan, Real Madrid and Panathinaikos following his early-career success at Olympique Lyonnais and Chelsea.

In France, he was present for two of OL’s record seven successive titles, and was among one of the finest players to have represented Les Gones during their glittering era.

After signing for Chelsea for a then African and club record £24.4 million in 2005, he overcame early issues with his overzealous tackling—Dietmar Hamann was one notable ‘victim’—to win the title in his first season.

So successful was his maiden season at Stamford Bridge, that he was nominated for the 2006 Ballon d’Or and the FIFA World Player of the Year award.

He also won the BBC African Footballer of the Year award, and placed third in Caf’s award.

The season afterwards, Essien’s rise continued, even if the injuries had begun to creep in more regularly.

He was voted Chelsea’s Player of the Season following the 2006-07 campaign, and was again nominated for the world’s grandest individual player prizes.

Steadily, however, the injuries stymied his progress, slowed him down, reduced his playing time, and he slipped to the peripheries of the conversation when the world’s greatest players were assessed.

After averaging over 30 appearances per season in his first three campaigns at Stamford Bridge, he managed just 25 across the 2008-09 and 2009-10 seasons combined, before returning in style during the 2010-11 campaign.

He became the fourth Ghanaian to win the Champions League when Chelsea beat Bayern Munich in 2012, but by this point, Essien was a shadow of his former self, and didn’t make it off the bench.

Still, while they might not have always come together at the same time, Essien left Chelsea with the honours, the memories and the legacy…just about…that his immense talent deserved.

Perhaps, at club level, he could have enjoyed a few more magic moments—such as the unforgettable strikes against Arsenal and Barcelona—but he still enjoyed the kind of club career that the vast majority of players can only dream of.

At international level, however, Essien will surely feel unfulfilled, not least because he missed out on the greatest chapter in Ghanaian footballing history.

Despite playing a pivotal role in securing the Black Stars’ qualification to the 2010 World Cup—the first on African soil—Ess would ultimately have to sit out the tournament due to a knee injury.

It was a bitter blow, not just because a World Cup ought to be among the highlights of any player’s career, but because of what the Black Stars would achieve without the Bison.

Their run to the quarter-finals—where they were defeated in such controversial and infamous fashion by Uruguay—represented only the third time that an African side had made the final eight at the grandest stage of all.

As the continent’s quintet proved again in Russia, it’s a magnificent achievement.

Without Essien, a midfield containing Anthony Annan, Kevin-Prince Boateng, Stephen Appiah, Kwadwo Asamoah, Andre Ayew and Sulley Muntari still held their own, beating Serbia and the United States, drawing with Australia and Uruguay, and only narrowly falling to Germany in Johannesburg.

However, imagine what might have been had a fully fit Bison been present, and had Ghana been able to call upon his dynamism, tenacity and ferocity during that cagey, testing quarter-final against the Uruguayans.

Had Essien been present and Ghana still fallen, his role in the Black Stars’ run would surely have been one of his crowning glories. Had they edged past Uruguay, then the midfield powerhouse might have been looking at immortality.

African Cup of Nations success also evaded Essien and, when comparing the continent’s finest players, it’s surely a black mark that stands against him.

Didier Drogba, Nwankwo Kanu and Sammy Kuffour are other major superstars from African powerhouses not to have clinched the top continental honour, although Essien did come close on several occasions.

In 2008, when he was named in the Team of the Tournament, he was influential as Ghana finished third on home soil.

Perhaps the semi-final defeat by Cameroon in Accra will go down as one of the great regrets of Essien’s Black Stars career. The hosts had gone close through Eric Addo and John Paintsil among others, and were bossing the contest, before they were undone by Emmanuel N’Kong’s 71st-minute winner after excellent interplay.

It was a match—as it was a tournament—that reminded observers of just how effective Essien could be when played in the heart of the park, as too often at Chelsea by then, he’d been squeezed into a full-back role.

At the 2010 Afcon, the continental title was arguably even more attainable for the Black Star and his teammates.

Even after Essien’s tournament was ended early through injury, and with Appiah and Muntari also absent, a Ghana side that would produce the majority of the World Cup squad reached the final, and were only narrowly beaten by an Egypt side completing their hat-trick of triumphs.

What might Essien’s 2010 have looked like had injury not denied him the latter stages of the Afcon and South Africa’s World Cup?

He did still feature in two World Cups, more than many of Africa’s greats, and played a pivotal role in 2006 as Ghana qualified for the tournament for the first time and then escaped from an ominous group.

By the time they faced Brazil in the Round of 16, Essien was, unsurprisingly, injured.

Then, the 2014 World Cup, perhaps the darkest hour in Ghanaian football, at least within an international context.

Essien’s interview with with GHOne TV, when he confirmed his retirement, didn’t explicitly express his regret for returning for that tournament, but his disappointment with how things unravelled in Brazil was evident.

Called back by Kwesi Appiah to “come and help”, Essien was one of a series of high-profile returnees whose reputations were later sullied—no pun intended—by the fiascos that accompanied that campaign.

Perhaps he felt compelled to return due to patriotic pride, perhaps it was a desire—conscious or subconscious—to make up for missing the QF run in 2010.

Either way, Essien played 19 minutes of Ghana’s opening defeat by the USA, and wasn’t seen again as the Stars’ campaign descended into farce and acrimony.

It was a regrettable end to an international career in which Essien had helped to write history, but ultimately fallen short of participating in or securing the triumphs that would have defined his international legacy.