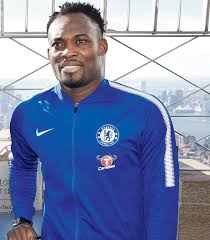 Former Chelsea midfielder Michael Essien has lauded the impact of Maurizio Sarri since his arrival at Stamford bridge.

According to the Ghanaian international the Blues are unbeaten so far this season because former Napoli boss has changed their playing style.

“Sarri came in with a different system,” he told the Mirror

“But the most important thing is the players that he has got. I think they are the players for any system.

“The 4-3-3 is working really well for them at the moment and they have to keep going like that and win something.

“Getting a new manager is always difficult but it seems like that players are warming to what he is doing and they are on the right path, so hopefully they can do something this year.”

Chelsea return to Premier League action on Saturday with a tough test against Manchester United.