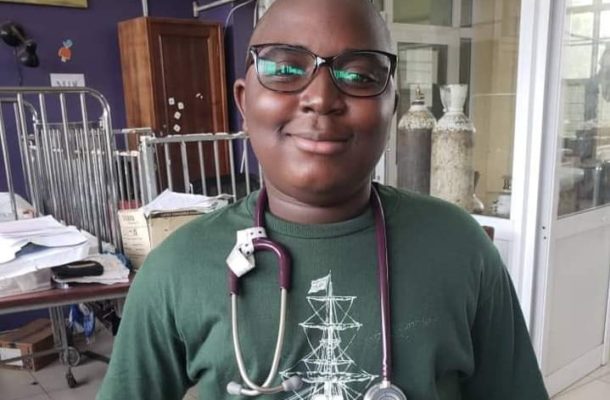 Michael Kofi Asiamah, 13, a much talented boy has died at the Korle Bu Teaching Hospital after a successful surgery to remove a brain tumor was completed. Master Asiamah had been recuperating fast after the surgery only to complain of chest pains and give up the ghost.

His mum, Cordelia Ama Selormey, who confirmed his death on social media, thanked everyone who had contributed towards his surgery.

Ghanaians on social media have been reacting with shock following the confirmation of the sad news.

Generous Ghanaians had contributed towards his surgery when an appeal for funds was launched recently. Master Asiamah had shown promise in singing and rapping and had many praising his talent.

Read his Mum’s message on Facebook following his demise today:

Where do I start? How do I tell it?
The pain is so overwhelming…the tears, uncontrollable.
We walked into Korlebu a few weeks ago as mother and son.
My only son…
My deepest affection.
The best and most important thing that ever happened to me.
My best friend and partner for the past 13 years!
Micheal why?
We did everything we could.
Michael had his surgery and it was very successful. He was talking, eating and making a beautiful recovery. We were happy…but that joy was earlier this evening, in less than 20 minutes just snatched away…
Michael had finished eating and was being prepped for bed by the attendees. He complained of a pain in the chest and just like that, my baby was gone!
My Michael is gone.
They won’t even mention his name no more. He has a number now.
I will walk out of this hospital alone….
Go home alone…
This is hard!
But all the same I came to thank you again. At least when we came to you for help, you didn’t hold back. Michael is grateful. I am very grateful.
Thank you.
I’ll hold on to the few good memories we made in his short time on earth and continue to pray that the sun shines tomorrow.