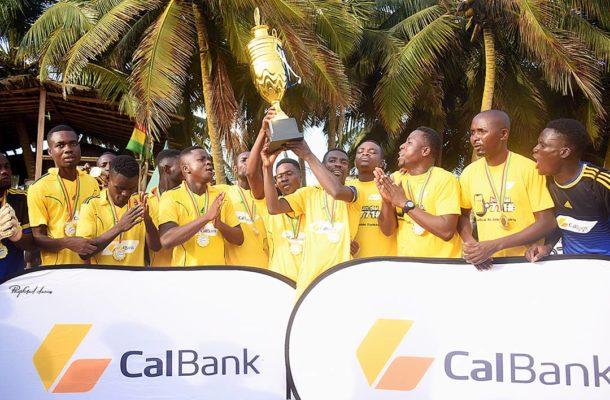 Officials and players of the victorious team paid a courtesy call on their chief patron and CEO Togbi Joachim Acolatse V - Dufia of Kedzi, to present the 2019 CalBank Super League trophy.

Togbi Joachim Acolatse V after receiving the club with overwhelming joy rewarded the players with an undisclosed amount of cash for their amazing display at the just ended Super League.

He also promised to secure additional sponsorship for the team, provide beach soccer balls, jerseys, bibs and other logistics the club may need for the 2020 Beach Soccer campaign.

Mighty Warriors set a national record after winning their second trophy in 2019 with an emphatic 10-0 demolition of Marine Stars from the Central region in the CalBank Super League finals in Cape coast.

According to the club captain Innocent Kumensah, the next point of call would be the Awomefia of the Anlo State; Togbi Sri III

Mighty Warriors are expected to wrap up their tour with a visit to the headquarters of Ghana Beach Soccer parent sponsor CalBank on Friday.

According to the captain of Mighty Warriors, 2020 will be a defining year for his club as they seek to win more laurels for the small fishing community of Havedzi.

"We are preparing for friendly matches in some neighboring countries so hopefully we will play one against a top Togolese side early next year".

With their recent feat, Havedzi Mighty Warriors are now the second most successful beach soccer club in Ghana with one Premier League title, one Super Cup and one Super League crown.