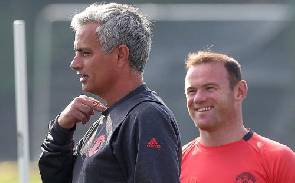 Jose Mourinho maintained Wayne Rooney has a big part to play for Manchester United despite dropping the captain for Saturday's 4-1 Premier League win over Leicester City.

United were rampant during the first half at Old Trafford, with Chris Smalling, Juan Mata, Marcus Rashford and Paul Pogba all on target before the break as Rooney watched on.

But speaking after the match, Mourinho insisted 83rd-minute substitute Rooney retained his trust after a string of heavily criticised displays during the opening weeks of the season.

"His team won, his United won. That's normal [that he is happy]."