Mubarak Wakaso out of the Black Stars squad due to injury 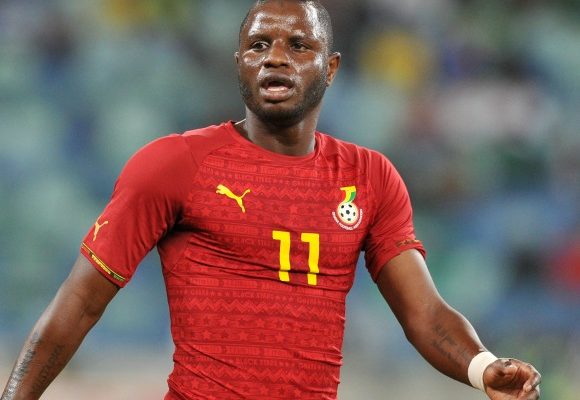 Mubarak Wakaso will not be a part of the Ghana squad that will face Zimbabwe in the 2022 World Cup qualifier due to a niggling injury concern.

Ghana will be without the services of five key players for the 2022 World Cup qualifier double header against Zimbabwe as the players have asked to be excused for the impending assignment.

Wakaso is said to have sustained the injury during Ghana's last World Cup qualifier against South Africa and has been excused from the double header game.

The Shenzhen FC player has scored 13 goals in 65 appearances for the Black Stars since his debut in 2012.

Midfielders Alfred Duncan, Mubarak Wakaso are among the five players who will not be traveling to Ghana for the Zimbabwe clash.

Other players who will not travel for the double header clash are Brentford winger Tariqe Fosu, Kotoko defender Ismail Ganiyu and Italy-based striker Emmanuel Gyasi.

The Ghana Football Association have announced that the technical team have excused the above mentioned players from the Ghana squad that will face Zimbabwe in the World Cup double header.

Alfred Duncan played for Fiorentina last weekend in their 2-1 loss to Napoli in the Italian Serie A despite reports stating that he was not fit.

The Black Stars will face Zimbabwe on Saturday 9th October,2021 at the Cape Coast Stadium with the return leg set to come off on Tuesday 12th October in Harare.