There must be transparency in the operations of BRT buses – O. B. Amoah 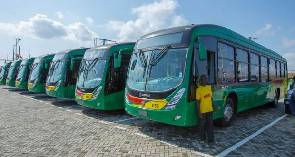 Chairman of the Subsidiary Legislation Commission, Hon. Osei Bonsu Amoah has called for transparency in the operations of the Aayalolo Bus Service, a partial Bus Rapid Transport (BRT) being run a group of transport unions in partnership with the Government of Ghana.

He also believes that managers of the buses should be forthcoming with information about the buses, stressing that once that is achieved, issues of suspicion would be a thing of the past and would help prevent chaos that are normally characterized with the operations of services.

“I will want them to implement it very well to inure to the benefit of the people. We should be transparent and forthcoming about information about it. Unfortunately it is being commissioned in an election year and people are going to read a lot of meanings into it but that should be the case. I am praying that December comes and goes and we will do away with all these things”, he noted.

Mr. Amoah who is also the Member of Parliament for Akuapem South made this observation when interacting with TV3 on Saturday.

He was contributing the piloting of the Aayalolo buses.

Also contributing to the issue was a lecturer at the University of Education, Winneba, Dr. Ahmed Jinapor.

He want the public to be told about much money has been invested into the project and expected returns to be derived from the initiative.

The Aayalolo buses are currently being piloted on the Amasaman-Ofankor-Achimota through to Tudu in the Central Business District corridor before extending it to other parts of the Greater Accra Region.