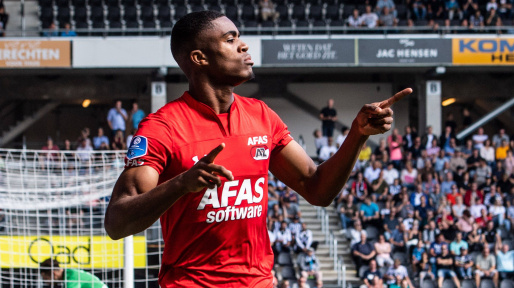 Dutch born Ghanaian striker Myron Boadu has been in very good form for his Dutch Eredivisie side AZ Alkmaar in the current season.

He has picked off from the truncated league season last year where he scored 14 goals and recorded 4 assists in 24 league matches.

This season the Holland International has scored 13 goals while providing one assist for AZ Alkmaar in the Erdevisie in 29 matches.

Coach of Eredivisie side Sparta Rotterdam, Danny Koevermans says the youngster's form bellies his age and hoped he is soon snatched by one of the big teams in Europe.

"I find that very difficult to say. In any case, he proves that he can easily handle the level of AZ and the Eredivisie. He is still very young, but finds the goal super easy. Hopefully there is a big club that has it in him. looks forward to it. " he said

Boadu became the first player born in the 21st century to play and score for the Netherlands in 2019 against Estonia in a 5-0 drubbing on his debut.

The AZ Alkmaar striker was on target in the Eredivisie last weekend in his side's 3-1 win over Waalwijk.