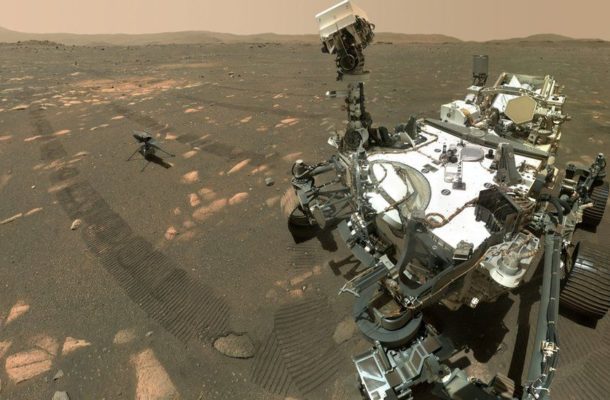 The American space agency has successfully flown a small helicopter on Mars.

The drone, called Ingenuity, was airborne for less than a minute, but Nasa is celebrating what represents the first powered, controlled flight by an aircraft on another world.

Confirmation came via a satellite at Mars which relayed the chopper's data back to Earth.

The space agency is promising more adventurous flights in the days ahead.

Ingenuity will be commanded to fly higher and further as engineers seek to test the limits of the technology.

The rotorcraft was carried to Mars in the belly of Nasa's Perseverance Rover, which touched down in Jezero Crater on the Red Planet in February. 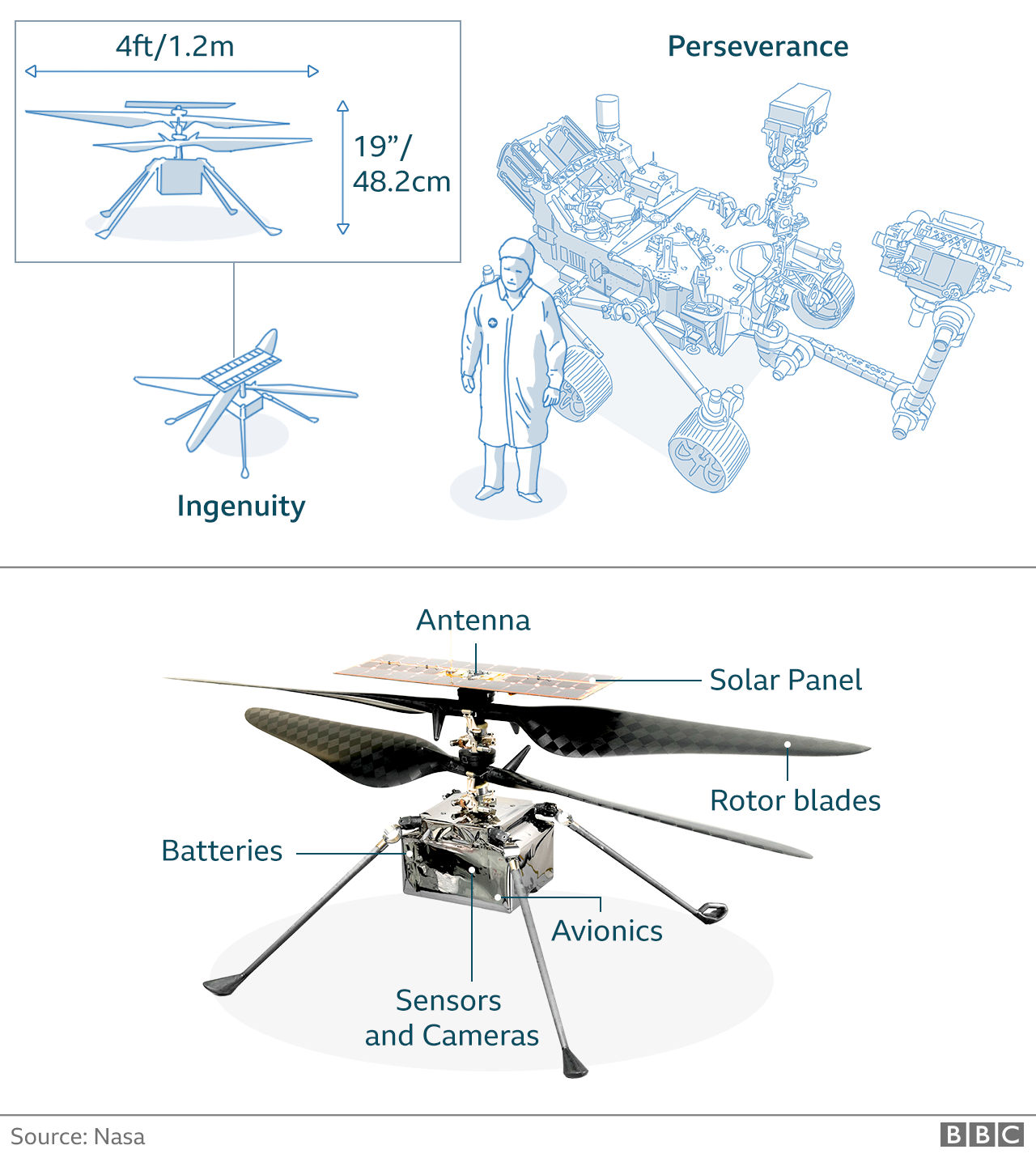 "We can now say that human beings have flown a rotorcraft on another planet," said a delighted MiMi Aung, project manager for Ingenuity at Nasa's Jet Propulsion Laboratory (JPL) in Pasadena, California.

"We've been talking for so long about our 'Wright Brothers moment' on Mars, and here it is."

This is a reference to Wilbur and Orville Wright who conducted the first powered, controlled aircraft flight here on Earth in 1903.

Ingenuity even carries a small swatch of fabric from one of the wings of Flyer 1, the aircraft that made that historic flight at Kitty Hawk, North Carolina, more than 117 years ago.

There were cheers in the JPL control centre as the first photos of the flight arrived back on Earth. In the background, MiMi Aung could be heard saying: "It's real!"

To claps from her colleagues, she tore up the contingency speech to have been used in the event of failure.

The demonstration saw the Mars-copter rise to about 3m, hover, swivel and then set down. In all, it managed almost 40 seconds of flight, from take-off to landing.

Getting airborne on the Red Planet is not easy. The atmosphere is very thin, just 1% of the density here at Earth. This gives the blades on a rotorcraft very little to bite into to gain lift.

There's help from the lower gravity at Mars, but still - it takes a lot of work to get up off the ground.

Ingenuity was therefore made extremely light and given the power (a peak power of 350 watts) to turn those blades extremely fast - at over 2,500 revolutions per minute for this particular flight.

Control was autonomous. The distance to Mars - currently just under 300 million km - means radio signals take minutes to traverse the intervening space. Flying by joystick is simply out of the question.

Asked whether she was surprised the flight had worked, MiMi Aung said: "No, I'm not. We really had nailed the equations, the models and the verification here on Earth in our laboratory tests. So, it then became a question of: have we chosen the right materials to build Ingenuity, to survive the space environment, to survive the Mars environment?

"We've gone from 'theory says you can' to really now having done it. It's a major first for the human race," she told BBC News.

Ingenuity has two cameras onboard. A black-and-white camera that points down to the ground, which is used for navigation, and a high-resolution colour camera that looks out to the horizon.

A sample navigation image sent back to Earth revealed the helicopter's shadow on the floor of the crater as it came back in to land. Satellites will send home more pictures of the flight over the next day. There was only sufficient bandwidth in the orbiters' first overflight to return a short snatch of video from Perseverance, which was watching and snapping away from a distance of 65m. Longer sequences should become available in due course.

Nasa has announced that the "airstrip" in Jezero where Perseverance dropped off Ingenuity for its demonstration will henceforth be known as the "Wright Brothers Field".

A successful maiden outing means that a further four flights will be attempted over the coming days, each one taking the helicopter further afield.

The hope is this initial demonstration could eventually transform how we explore some distant worlds.

Drones might be used to scout ahead for future rovers, and even astronauts once they eventually get to Mars.

"It's really taking a tool that we haven't been able to use before and putting it in the box of tools that is available for all of our missions going forward at Mars. So for me, it's really exciting personally and for the community overall it opens up new doors," said Dr Thomas Zurbuchen, the head of science at Nasa.

"We will be able to explore areas where we cannot use a rover. Some of these crater walls, for example, are so exciting; scientists have been writing papers about them."

Nasa has already approved a helicopter mission to Titan, the big moon of Saturn. Dragonfly, as the mission is known, should arrive at Titan in the mid-2030s.