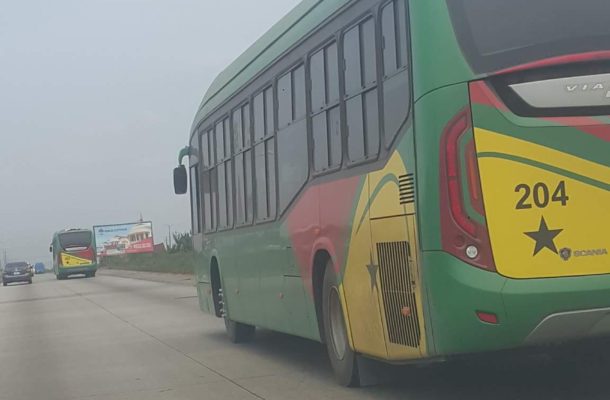 The new buses seen this afternoon

Government has ditched the unpopular bus branding using the picture of President John Mahama with new metro buses only carrying the flag of Ghana, Ghanaguardian.com can exclusively reveal.

With disastrous consequences for the government in the previous bus branding deal, the NDC led administration has decided to steer clear of the controversy with 200 new sets of buses only bearing the flag of the country.

The previous bus branding which also had pictures of all former Presidents of Ghana, led to resignation of the then Transport Minister Dzifa Attivor after the scandal over the price and pictures used.

The previous set of 116 buses generated a high level of controversy considering the gargantuan amount of GHC3.6 million involved in the re-branding deal.

Now the country will anxiously wait the amount spent on the modest branding on the new fleet of buses after the previous exercise seriously dented the President's record on corruption.

Now new set of government-branded buses numbering about 200 were seen heading to the State House in Accra from the Tema Port without the pomp and pageantry that accompanied the previous that sealed the career.

The already-branded Metro Mass Rapid Transit (MMRL) buses were fully decorated in the national colours  interestingly without the controversy generating images of past and present Ghanaian leaders.

The state house-bound buses were sprayed in red, yellow and green with a touch of black representing the black star of Ghana.

The cost of re-branding of the buses had raised controversy in parliament following the approval of  GhȻ126, 317, 102 for the Ministry of Transport for the 2016 financial year with Minority Leader in Parliament, Osei Kyei Mensah Bonsu vehemently opposing the budget.

Minister of Transport Dzifa Attivor who superintended over the signing of the contract resigned her position as the pressure heightened with several Ghanaians labelling the Smartys branded buses "unnecessary" and "wasteful".