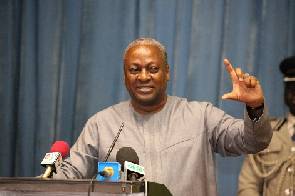 President John Dramani Mahama has promised that the next NDC administration his watch will train about 10,000 female head porters popularly known as ‘Kayayei’ for employment if he is retained after the December 7, 2016 general election.

Kayayei, an ethnic Ga word, is a trade often undertaken by thousands of young female adults who migrate from the northern Ghana to cities like Accra and Kumasi.

The practice has been in existence in Ghana for decades and children between ages 15 to 18 and adults 45 years and above, engage in what is described as a hand-to-mouth job. Analysts have suggested the need for government to make the northern part of Ghana economically viable and habitable to minimize the migration.

But presenting the highlights of the National Democratic Congress’ (NDC) 2016 manifesto in Accra on Tuesday, President Mahama said he intends to employ to about 10,000 of the head porters to give them a decent living. According to him, the Kayayei will be part of a new employment model under the newly established Youth Employment Agency (YEA).

Available research data indicates that some of these Kayayei work in chop-bars (local restaurants), hawk on the streets, assist market women in trading, act as shop assistants and engage in other domestic chores, sometimes menial, just to make ends meet.

Most of them are considered to be non-literate, school dropouts, or young females who have escaped from outmoded socio-cultural practices such as forced marriages and female genital mutilation (female circumcision) among others. They live in the streets and in open places whiles engaging in menial jobs such as carrying of heavy loads on their heads.

Flagbearer of the opposition New Patriotic Party (NPP) for the 2016 general election, Nana Addo Dankwa Akufo-Addo, had also promised to provide free hostel accommodation for Kayayei if elected as president.

This, Nana Akufo-Addo explained, will give decent accommodation to the Kayayei and save them from sleeping under perilous living conditions.

Addressing supporters of the governing NDC at Savelugu in the Northern Region, President Mahama said the promise to provide free temporary housing for such vulnerable girls is insulting to the dignity of northern girls. “Because you (Nana Addo) are desperate to win, you are promising free everything; I will give free healthcare to children under 18 years.

It is being implemented already…He says he will give free hostels to Kayayei. That is the most insulting one.” “So our girls should remain there and continue to carry people’s goods. If you have a sickness, you must go to the cause of the sickness; you don’t treat the symptom…So if you want to solve the problem of Kayayei, then you will do what NDC is doing. We’ve been to the South; we are registering our little sisters who are Kayayei there.

We are putting them in training, we are teaching them how to be dressmakers, hairdressers, how to be able to do work with their hands, we are giving them sewing machines and other equipment and then we are bringing them back to come and settle so that they can work for themselves,” President Mahama stated.