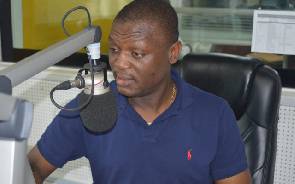 The National Democratic Congress (NDC) is unhappy with what it says is a deliberate attempt by the opposition New Patriotic Party (NPP) to misinform Ghanaians about the road infrastructure in the country.

The NDC Campaign Coordinator, Kofi Adams, said government cannot claim to have fixed all roads in the country and if there is any such suggestion, then it is the NPP propaganda at work.

“If you go round from Ho all the way to Amedzefe the road has been fixed but you have to know that we have not claimed that we have fixed all roads in this country,” he told Evans Mensah, host of Joy FM’s Top Story programme Wednesday. The state of roads in the country has become a major point of disagreement between the governing NDC and opposition NPP.

President Mahama, contrary to his comment in 2008 that infrastructure was part of every government’s responsibilities, has been touting his achievements in road infrastructure to seek a second term.

He has accused the flagbearer of the NPP, Nana Addo Dankwa Akufo-Addo, of sleeping on his five-day tour of the Western Region which explained why he did not see the major road projects undertaken by his administration.

Even when the NPP, at a news conference, said the chiefs and people of the region registered their displeasure about the nature of the road to Mr Akufo-Addo, NDC functionaries have dismissed the claim.

According to government spokespersons, their achievements regarding road infrastructure are unparalleled.

However, in a development that has taken the NDC by surprise, residents in two of government's strongholds have demonstrated over the deplorable nature of their roads.

Residents of both Ho in the Volta Region and Gbulung in the Northern Region hit the road Wednesday registering their displeasure with government over the poor nature of the roads which have impacted negatively on their socio-economic activities.

One resident told Joy News’ Ivy Sertodjie during the demonstration in Ho they have been hanging on promises made by the governing National Democratic Congress (NDC), but could no longer stand the neglect there are going through.

“We have been begging the government to fix the road for us but they refused. We are tired of it. If they don’t fix it come December 2016 they will see what we will do,” he continued.

The incident in the Gbulung in the Kumbungu district took a different turn when the police opened tear gas on the crowd.

Joy News’ Northern Regional Correspondent, Martina Bugre explained the police had to use tear gas to disperse the crowd due to a breach of protocol. The protesters tried entering the premises of the assembly contrary to what was agreed by their leadership.
Communications Director of the NPP, Nana Akomea, said these demonstrations which erupted in the NDC’s strongholds have given weight to the complaints of the people of the Western Region.
He said the agitation by the residents means that even if the NPP’s flagbearer slept on his tour of the region, the citizens of the country are not asleep.

“Nana Akufo-Addo does not conjure the felt needs of the people. It is the people and the chiefs who told him,” he said, adding, “Why is the President campaigning on his road projects after he had said such attempts was an exercise in futility?”

But Mr Adams said nobody could deny government of its achievements regarding road networks in the country.